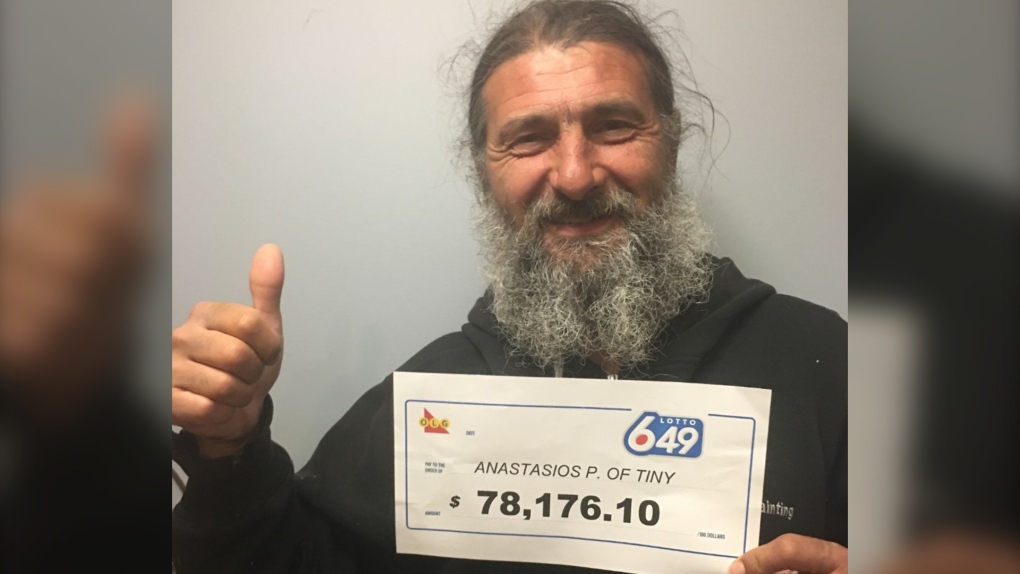 A house painter from Tiny Township said he started shaking when he realized he had won nearly $80,000 with his Lotto 6/49 ticket.

Anastasios Panagopoulos, 47, said he plays the lottery regularly since moving to Canada from Greece 17 years ago.

"I went to check my ticket using the Ticker Checker and saw $78,176." He said he was so excited he brought the store clerk to the ticket checker for a second look.

Panagopoulos said he plans to use his windfall to put a down payment on a house. "I feel so blessed."

Several locals have won the lottery recently, including a potato farmer and a stay-at-home mom.

Lisa Williams-Rozario won over $600,000 in the July 8 Lotto Max draw. The married mother of five from Stouffville hopes to help charities and travel with her winnings.

A former member of the military from York Region took home a massive $65 million jackpot in the July 7 Lotto Max draw.  Jansen Ng said he plans to continue cutting his own hair regardless of becoming a multi-millionaire.

An Alliston potato farmer celebrated winning over $300,000 with his encore numbers in the June 11 Lotto Max draw. Shawn Irvin split the $1 million Maxmillions prize with two other winning tickets sold in Sudbury.

And Vergilio Fiore, a married father of three from Barrie, won twice on the same Poker Lotto All In ticket, cashing in just over $90,0000.

A shooter attacked a grocery store in an upscale Tennessee suburb on Thursday afternoon, killing one person and wounding 12 others before the shooter was subsequently found dead of an apparent self-inflicted gunshot wound at the store, authorities said.

Canada jumps up list of billionaire countries in new report

Canada added seven billionaires in 2020, increasing its total to 53, tied for 12th-most in the world with Brazil, according to a new global report.

Anti-vaxxers in Quebec could be fined up to $12,000 for protesting near schools, hospitals