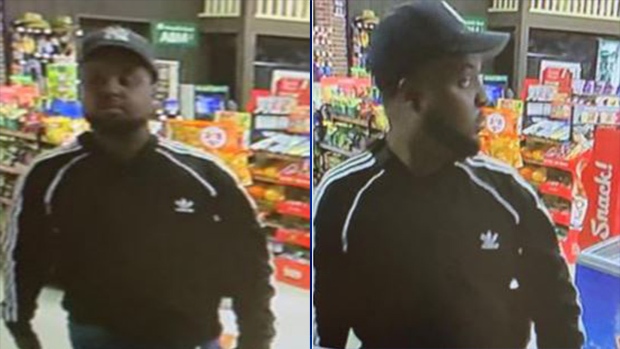 Police released these images of a man wanted in connection with a credit card theft in Barrie on Wed., Aug. 7, 2019 (Barrie Police Services)

Police are appealing to the public for help finding a man accused of stealing a credit card from a gym locker and making several purchases with it.

Barrie Police say the theft happened last week at a gym in the city's south end. They say the credit card was taken from a locked locker while the owner was working out.

Police released an image of the man they are looking for in connection with the investigation.

He is described as being a black man, 25 to 30 years old with a moustache and beard. He was wearing a black and white striped Adidas sweatshirt and a black baseball hat with a white logo.

Anyone with information is asked to contact the Barrie Police Services.

This suspect stole a credit card from a southend #Barrie gym & used it to make purchases at a number of northend #Barrie stores & restaurant. If you know him & can help #BarriePolice, please call 705-725-7025, ext. 2727. For details, please see: https://t.co/1sqVU7Ztw0 @CrimeSDM pic.twitter.com/Lv8dhh08Q7