As many people prepare to hit the road, water or trails this Canada Day long weekend – OPP remind drivers they have the ability to make it an incident-free weekend.

Friday was a busy day for drivers on our roads. Lots of people have been heading north for the long weekend and the OPP were busy too on the ground and in the air.

“Traffic has been non-stop since basically the 401 so it’s been bumper to bumper. We stopped probably four or five times and waited and we haven’t passed an accident yet so it’s just all volume,” said one driver.

Many people are heading north and a lot of drivers were going too fast. On Friday the OPP was cracking down on speeding. They had officers in the air working with teams on the ground. Speeders were clocked from the sky and then stopped within seconds of breaking the law.

OPP released a report on speeding showing the number of deaths has doubled compared to what it was this time last year.

“We had a spike in the number of speed related deaths this year over last year and that’s concerning for us. So our focus this weekend is on aggressive driving and that’s not just speeding – that’s following too close, unsafe lane changes and failure to yield,” says OPP Sgt. Kerry Schmidt.

The report says out of the 113 people killed on OPP roads as of June 15 this year, speed was a factor in 33 deaths. Distracted driving contributed to 24 deaths and impaired driving resulted in 12 deaths.

Friday morning it was only a matter of minutes before Constable Liz Newton was pulling cars over.

“This vehicle was seen by the aircraft observed going 138 km/h. That’s a total payable fine of $283 which is also four points.”

She says long weekends can be particularly bad and people need to slow down or think about leaving at a different time.

“The worst thing is people trying to get a jump on the weekend, it makes the traffic volume increase, makes speed increase and once you find traffic starts to get congested people start losing their patience and temper.”

Police say because Canada Day happens during the week this year, drivers need to be ready for lots of southbound traffic from Sunday right until Tuesday night. 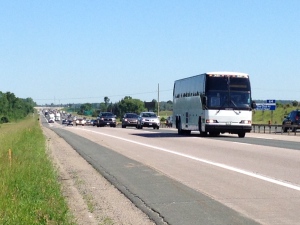