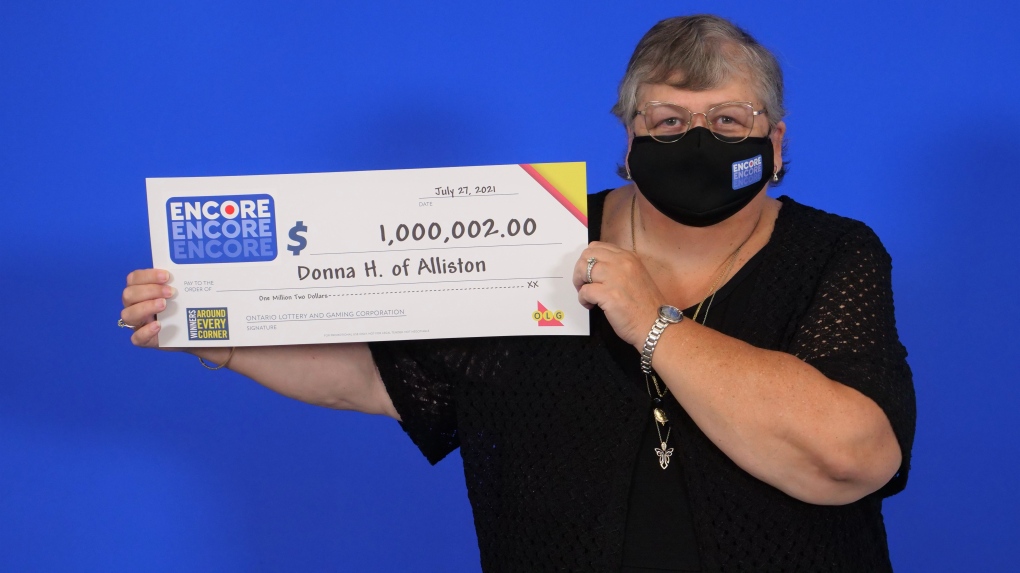 An Alliston grandmother of five has become an instant millionaire after spending an extra buck for Encore on her Lotto 6/49 purchase.

Donna Horan said she purchased her winning ticket through the OLG app and checked her email when she noticed she had won a couple of free plays and $20.

"The fourth ticket was the $1 million winner," the 61-year-old said she immediately told her husband. "He didn't believe me."

Horan plans to donate to charity and complete some house renovations with her winnings. She said she also hopes to treat the family with a trip to Disney World.

"The win hasn't sunk in yet," she concluded.

The Alliston woman matched all seven Encore numbers in exact order to win the $1 million prize. She also won another $2 on another Encore selection with one of her other tickets.

There have been several local lucky lottery winners over the past couple of months.

A house painter from Tiny Township who moved to Ontario from Greece 17 years ago won nearly $80,000 with his Lotto 6/49 ticket.

A stay-at-home mother of five from Stouffville hopes to travel after winning over $600,000 in the July 8 Lotto Max draw.

A former military member from York Region became a multi-millionaire after cashing in a $65 million jackpot in the July 7 Lotto Max draw.

The June 11 Lotto Max draw was lucky for an Alliston potato farmer who celebrated winning over $300,000 with his encore numbers.

And a Barrie man struck it lucky twice on one Poker Lotto All In ticket to win just over $90,0000.

Hundreds of people attended court in a small western Alberta town on Tuesday morning for the first appearance of a man charged in the double homicide of a young woman and her toddler.

The FBI is asking for the public's help in finding Gabby Petito's fiance Brian Laundrie after a coroner made an initial determination that Petito died by homicide.

U.S. to return 3,500-year-old Gilgamesh Tablet to Iraq after looting

A 3,500-year-old clay tablet that shows parts of a Sumerian poem from the Epic of Gilgamesh is being formally handed back to Iraq after it was stolen and eventually housed in a museum in the United States.