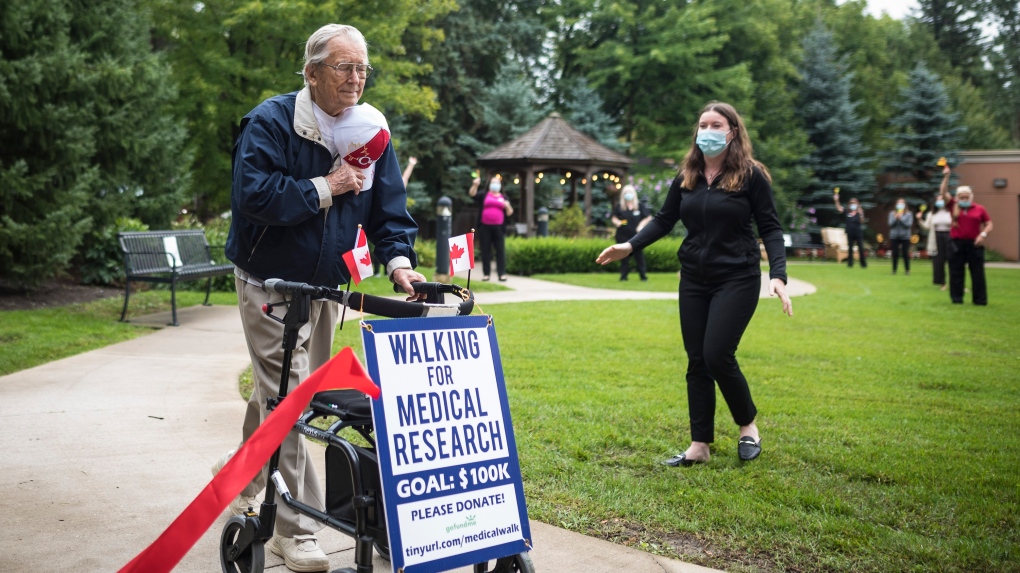 NEWMARKET, ONT. -- George Markow took off his red-and-white baseball cap and placed it over his heart, to the cheers of onlookers, as he finished walking his 100th kilometre to help raise funds to fight COVID-19.

The 99-year-old veteran of the Second World War had done 1,500 laps with his walker around his seniors' residence in Newmarket, Ont., raising nearly $47,000 to fight the coronavirus over four months.

Markow finally reached the milestone on Wednesday morning, saying he took on the challenge as a way of thanking the country that welcomed him decades ago.

"Canadian people have been so good to me," said Markow. "I wanted to give something back and help eradicate COVID-19 and get back to normalcy."

Born in 1921 to Finnish parents in Russia, Markow was conscripted against his will by the Soviet Union during the Second World War. He spent two-and-a-half years as a prisoner of war, confined to an underground bunker without access to basic hygiene.

"You can't even imagine what the conditions were like in that prison camp," Markow said.

When the war was over he moved to Canada and started a family.

"There aren't words to say how proud I am, how blessed I have been my entire life that this is my dad," said his daughter Sylvia Perkins. "I'm overwhelmed along with him. We've had many tears this morning."

Markow was set to hit the 100-kilometre milestone in early August but was forced to put his campaign on hold due to an unforeseen illness. Once he returned to health, Markow resumed his route, which Perkins said gave him much-needed exercise when there were no activities at his residence due to safety protocols.

"There really was no challenge. I just started at the beginning," said Markow.

Markow began doing circuits around the Roxborough Retirement Residence's garden paths to stay active during the early stages of Ontario's COVID-19 outbreak. All the money he has raised will be donated to the Sunnybrook Research Institute and Southlake Regional Health Centre Foundation's COVID-19 Action Fund.

"He still has a ways to go to reach his goal of $100,000," said Perkins. "We hope that people continue to donate to his GoFundMe campaign."

Markow said he plans to keep walking because he enjoys the activity and to keep raising funds.

Toronto Maple Leafs forward Zach Hyman surprised Markow with a jersey after the veteran crossed the finish line. The long-time Leafs fan was left nearly speechless by the gift.

"This couldn't have happened in my wildest dreams what happened to me today," said Markow, who lived in Burlington, Ont., most of his life. "I'm not recovered yet. I'm shocked."

This report by The Canadian Press was first published Sept. 2, 2020.