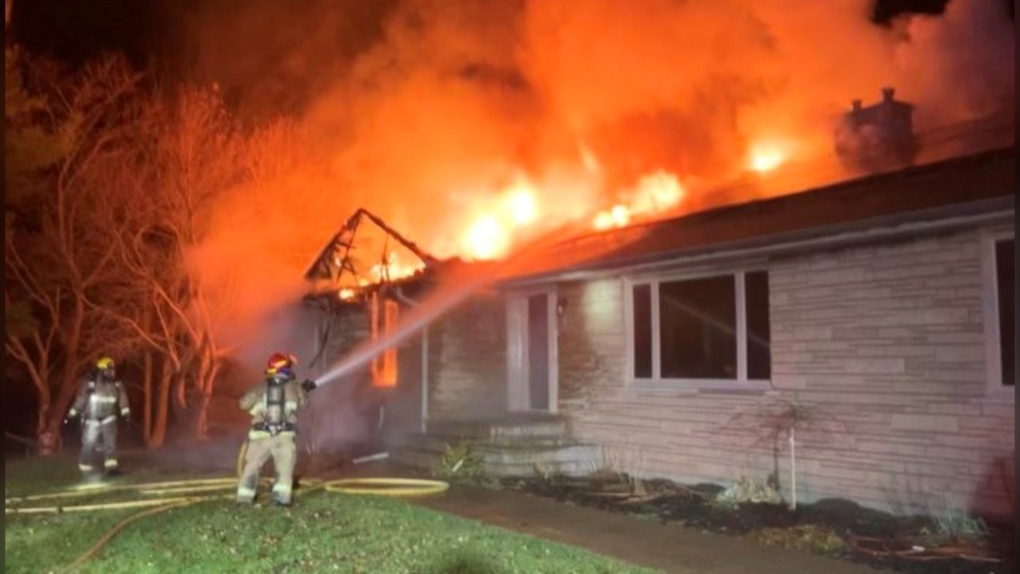 Firefighters battle a fire at a home in Springwater Township on Wed., Dec. 7, 2022. (Springwater Fire/Twitter)

A family of four escaped their home with just the clothes on their backs after a fire broke out in the early morning hours on Wednesday in Springwater Township.

Fire officials say working smoke alarms alerted the family around 1 a.m. to the flames at their Old Second South home.

Crews arrived to find the fire and heavy smoke overwhelming the home.

Thirty firefighters worked through the night to battle the blaze.

"The fire was challenging as the roof of the residence was covered in solar panels creating continuous live electricity," said Deputy Fire Chief Jeff French.

No one was injured, but officials say one pet, the family cat, died.

"The cause of the fire was accidental in nature," a release from the township stated.

"This fire is another example of how working smoke alarms save lives when seconds count," concluded French.

OPS and Ottawa Bylaw officers issued 192 parking tickets and 67 Provincial Offences Notices in downtown Ottawa this weekend, as hundreds of people marked the one-year anniversary of the 'Freedom Convoy'.

Friends and volunteers gathered Sunday at Kyiv's St Sophia's Cathedral to say goodbye to Andrew Bagshaw, who was killed in Ukraine while trying to evacuate people from a front-line town. This comes as Russian forces heavily shelled the city of Kherson, killing three people and wounding six others, the regional administration said.