At the Wishing Well Sanctuary, one more animal has found a home, against all odds.

Yoda is about five weeks old and has travelled from the Montreal area. He's a little pig with a big personality.

“He loves to crawl in your lap, he enjoys being kissed on the snout, and he loves his food – he is a pig,” says Brenda Bronfman, founder of the Wishing Well Sanctuary in Bradford West Gwillimbury. “And he plays with toys and is just a delight.”

But it's how he got here that's even more incredible.

“Well, he fell off the back of a transport truck,” says VP of the board of directors Wendy Sunega. “The transport truck was taking what they call weaner pigs that are between four and eight weeks of age to what's called a finishing barn. They put all the weaner pigs in there and fatten them up then approximately six months later they go for slaughter.”

“I just hope that a lot of people more people realize what these animals go through in the factory farm industry,” she says. “It's a miserable life, it's a difficult life, and it comes to a very nasty and painful end.”

That wasn’t going to cut it for Yoda, it seems. After his daring escape, organizers heard he needed a home, and volunteers were able to help bring him to Bradford. He's one of about 50 rescued animals that live at the Wishing Well Sanctuary. But it wasn’t an easy choice. There are lots of animals that need good homes, and space is often hard to find.

“It was a tough decision knowing that we are already full, but we also know that all the other sanctuaries are already full,” says Sunega. “And even though we have the land-space here it's going to require us to do some major fundraising to get some housing sorted out for him.”

The sanctuary uses the space it has and the animals it takes in for education. The sanctuary runs humane education programs that give kids a new way to learn about animals and nature. Workers and volunteers at the farm host activities like yoga and dance, as well as running programs for school boards, youth groups and families.

As the sanctuary figures out how to best find room as the little pig grows, Yoda has become somewhat of a celebrity. He's even taken to Twitter to share his story. And for him, the future is looking bright.

“He will be with friends,” says Bronfman. “We have a paddock that runs through the forest, he can race around. He will just live in happiness, that's our hope and our goal.”

“I think the force was definitely with Yoda,” Sunega adds. “And still is.”

While Yoda's story has received lots of attention, it is not unique. People who work here say that they get calls all the time asking if this sanctuary can take animals that are no longer wanted. 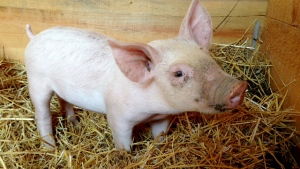