Cardboard Boat Race Returns to the Orillia Waterfront Festival for 2022

Cardboard Boat Race Returns to the Orillia Waterfront Festival for 2022 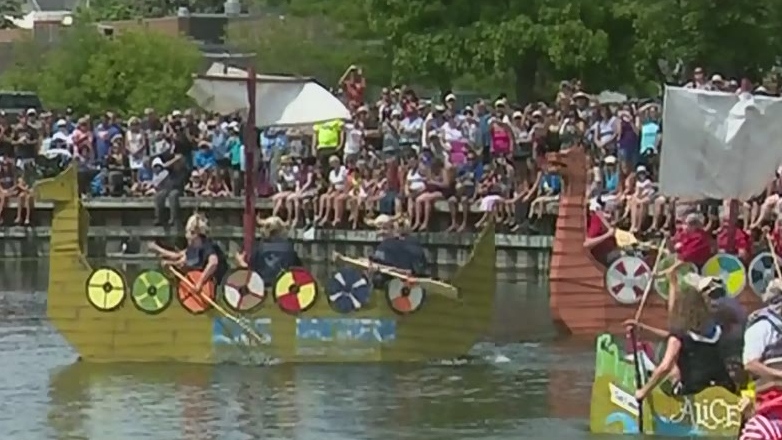 A Barrie cardboard boat race, as shown in this file photo, shows the beginning of the race before the boats disintegrated. (CTV NEWS)

The Waterfront Festival takes place on Aug. 5-7. and will once again feature a Cardboard Boat Race.

The popular event features contestants paddling homemade cardboard watercrafts in hopes of winning such prestigious titles as The Titanic Award for the most spectacular sinking and Best Dressed Crew for the most creatively costumed paddlers.

Prizes will also be awarded for the longest floating boat, biggest boat, and smallest boat.

The Waterfront Festival begins on Friday, Aug. 5 and runs all weekend long. In addition to the cardboard boat race, there will be plenty of other entertainment, including live music and “Dock Diving Dogs,” along with food and a vendor market.

Cardboard boat race registration was open to the general public until Aug. 3, with all ages encouraged and both single and team entries invited.

A few simple materials were used to create a cardboard boats: cardboard, tape, glue, and some buoyant materials such as pool noodles.

Boats are permitted to be any size or shape, as long as they are constructed from cardboard. Styrofoam is not permitted due to its tendency to break into small pieces that are hard to retrieve, but other materials can be added for buoyancy.

The boats must be propelled by human power only (no motors). Paddles are allowed and may be either homemade or store-bought.

The race will begin on Sunday, Aug. 7 at noon. The race will be in the area to the east of the Terry Fox Circle, near the federal dock in Couchiching Beach Park.

More information about the Waterfront Festival and Cardboard Boat Race is available online.