Ukrainian children learn about life in Canada at Camp Tiffin

Ukrainian children learn about life in Canada at Camp Tiffin 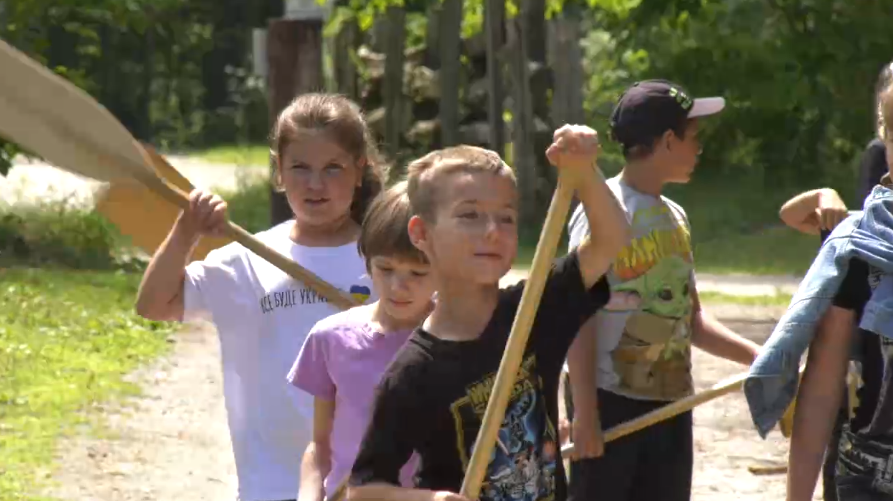 A local camp celebrated all things Ukrainian this week as some recent young refugees marked their first summer at a Canadian camp.

This year the Nottawasaga Valley Conservation Authority (NVCA) included 13 Ukrainian children as part of its annual newcomer camp. While the camp typically features a variety of cultures, this year, there was a focus on Ukraine due to the ongoing war.

"It's heartwarming, it really is," says Naomi Saunders, the education manager for NVCA. "And not only just because we get to see them having a good time, but we know that every day that they get to be here, they are one step closer to feeling safer, to feeling at home and feeling comfortable with where their new home is."

Camp Tiffin, which started Monday and runs until Friday, is a partnered effort with the Rotary Club of Barrie. "The youngsters have learned how to canoe, played popular hiking games and participated in various arts and crafts.

"The chance that this is giving them is that they can forget for a moment what they've been through and do what they should be doing, which is playing and making friends and making memories with each other," says Saunders.

To help the campers, a translator was on hand throughout the start of the week. Kyryl Varulin has lived in Canada for six years, coming from Ukraine and spent time this week teaching these newcomers English.

"To come to a new place, I think every single person has kind of went through it at one point in their life," says Varulin. "When you move from one school to another school, it's about the same experience, but imagine like 10 times worse because you don't speak the language; that's about the feeling you get."

Most of the students were connected to the camp through the Simcoe County District School Board.