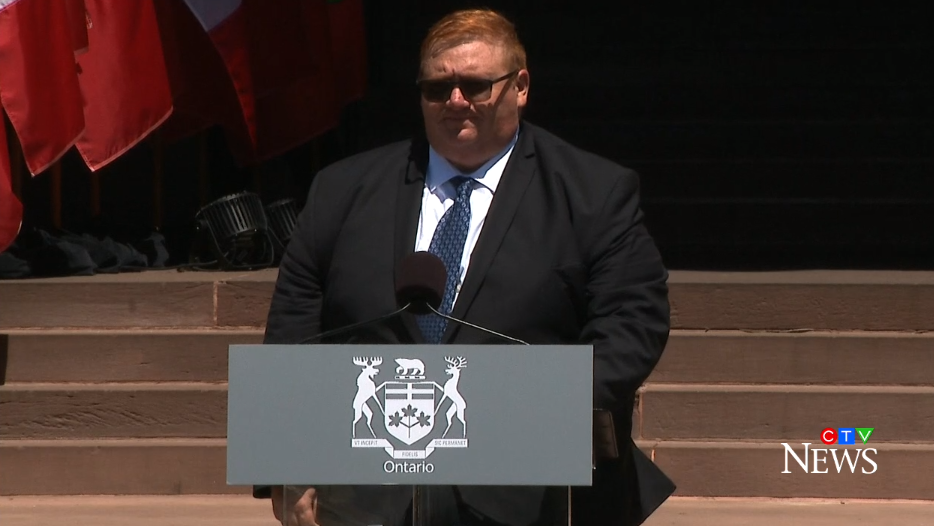 MPP Graydon Smith is sworn in as Minister of Natural Resources and Forestry on Fri., June 24, 2022. (CTV News)

Ontario's new natural resources minister is facing a hearing to determine whether he harmed a threatened turtle species when he was the mayor of a small town.

The charges brought in a private prosecution allege that Graydon Smith and the Town of Bracebridge, where Smith served as mayor, harmed Blanding's turtles as well as posed danger to the habitat of the at-risk species in June and August 2021.

A justice of the peace has signed off on the charges of violating the Endangered Species Act and last week set a hearing date of Sept. 21 on the matter. The charges have not yet been tested in court.

Smith was elected as a Progressive Conservative in the provincial election earlier this month and was sworn in as natural resources and forestry minister in Premier Doug Ford's cabinet last week.

A government press secretary for Smith confirmed that he was accused by a private citizen of violating the Endangered Species Act.

But he said the municipality was in a better place to comment on the case, which concerns road work done around the endangered turtle habitat.

"Council heard the concerns raised and sought mitigation measures before moving forward with the project," Curtis Lindsay said in an email.

"Given this was a decision made by council, the municipality is in a better position to provide any further comment."

A lawyer for the Town of Bracebridge said she is confident the charges will be thrown out.

Sarah Hahn also shared a letter sent from the town's chief administrative officer in September 2021 to a citizen who was concerned about road work disrupting the turtle habitat.

The letter explained how the town took the habitat into consideration by putting up turtle crossing signs and altering the operations to minimize damage.

"The fact is, and the evidence will show, that the Town acted diligently and appropriately in completing required road works within the vicinity of turtle habitat," Sarah Hahn said in an emailed statement. "It is unfortunate that Town resources must now be used to respond to these baseless accusations."

Smith won his seat in Parry Sound-Muskoka by a margin of just over 2,000 votes, squeezing out hopeful Green Party candidate Matt Richter.

Green Leader Mike Schreiner said the charges against Smith are telling when it comes to the government's priorities.

"It certainly shows a lack of concern that the premier and caucus have, that they would appoint a minister who isn't abiding by his own ministry," he said.

This report by The Canadian Press was first published June 28, 2022.

Four more ships carrying agricultural cargo held up by the war in Ukraine received authorization Sunday to leave the country's Black Sea coast as analysts warned that Russia was moving troops and equipment in the direction of the ports to stave off a Ukrainian counteroffensive.