Two people are dead and three people injured after an explosion caused a fire at house early Thursday morning in Kawartha Lakes.

OPP say it happened shortly after 7 a.m. at a home on Alvar Road, which is near Dalrymple Lake east of Orillia.

Police say an explosion in the home led to the fire.  The cause of the explosion remains under investigation but does not appear to be suspicious.

Five adult family members were in the home when the explosion happened. Two people died as a result and three people have been transported to hospital.

The Fire Marshal is on scene and officials say excavators will have to be brought in to take the house down piece by piece. Until that happens the bodies of the two victims won’t be removed and an official cause can’t be determined.

Paul Theriault was working on the house for the family on Wednesday.

“I really don’t know what to say. It’s incredible. They were the nicest people.”

Kawartha Lakes Platoon Chief Terry Jones says two of the three people who escaped the burning building saved themselves by jumping from an upper floor window. He says there’s no question that decision saved their lives.

“Apparently they tried to come down through the first floor and due to; at that point in time there was a fire. There was no way to get out through the main floor.”

One of the survivors is hospital in Orillia while the other two have been transferred to hospital in Toronto. A 22-year-old woman is suffering from life-threatening injuries; a man is in serious condition.

One of the family members drove out to the road and flagged down some local hunters who then called 911.

Because of the condition of the house, crews have not been able to determine if there were working smoke alarms inside.

Police will guard the house so investigators can try and piece this tragedy together. 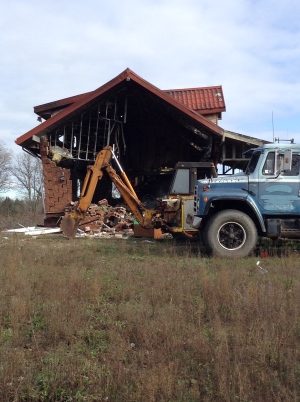