Winds not only caused damage to trees in our region, it also caused a big problem for the Mulmur–Melancthon fire department.

The 100-foot communication tower was bent and damaged when the windstorm swept through the region.

“It knocked out all our computer systems and our paging system so no notification for 9-1-1 if we had an emergency call,” say Mulmur-Melanchton Fire Chief Jim Clayton. “We went into an emergency mode, we put a system in place so we are now going through the Shelburne paging system so we can receive our calls.”

Dufferin emergency services in Orangeville were also notified about the situation and they brought in the Dufferin Amateur Emergency Radio team to lend a hand.

“We were called out as a back-up for any lost communication, we would do a ride along with the fire department, a couple of our members would go along with them and relay any information back to the fire station and from there it would go back to the count y offices,” says Alexander Giger with Dufferin Amateur Emergency Radio team.

The fire department needs the antennal to use its pages and smart phones. While some repairs have been made, they will continue to use other means to deal with the problem.

“One of our firefighters will be taking that computer system to his house and using his database which will bring that system back online for us,” adds Chief Jim Clayton.

Clayton says a temporary tower has already been ordered and should be in place within a few weeks but he’s hopeful the antenna can be repaired sufficiently to use in the meantime. If not, the fire station will continue to sue the back-up system. 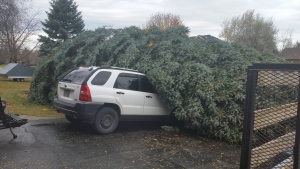