Survivors are trying to outsmart and out last…zombies.

But while the zombies may look real, they are actually trainers and volunteers at a zombie survival camp.

“We kind of put our heads together and said well we have a lot of interesting techniques and training that we have available and we could put a zombie spin on it,” said founder Peter “The Jedi” Lane.

A large scale simulation is the finale in a weekend course aimed at giving people the skills they need should a zombie apocalypse happen.

“Me and my fiancée talk about these hypothetical situation about what would happen and we realized that we really don’t know all the trades to take care of ourselves. So we thought this would be a great outlet to do that,” says Toronto resident L.A. Lopes.

“Scientifically speaking, I think it is possible. I mean rabies is a thing, it’s not so hard to believe there could be a virus that could eventually work on humans,” says zombie camp veteran Paul Lane.

People learn how to make shelters, use a bow and arrow, and even some basic combat skills.

“It kind of allows you to imagine a scenario where you would need this whole subset of skills that we’ve kind of walked away from as a society,” says instructor Eric “The Strategist” Somerville.

People say the course has lots of benefits.

“You feel really accomplished, you realize that if you were to be in the forest, you could build your own shelter and be safe from the elements,” says Lopes.

For many of the instructors, this kind of preparation is just the beginning.

“We take them from almost nothing to a significant set of skills. But it just opens the door to a whole world of learning,” says Somerville.

Organizers say they are hoping this camp is just the beginning. Eventually they want to take their program across Canada, so everyone is prepared. 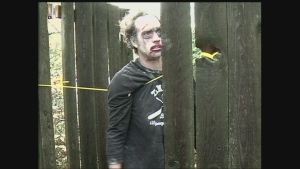