Snowmobile season may be over before it ever really got started

BARRIE -- It's been a slow start to the snowmobiling season, and as we head toward the end of February, there are still several trails closed to sledders.

Weather conditions have been less than ideal with temperatures on a sliding scale from mild to cold and wet.

"We've had lots of snow, but it just keeps turning warm and melting down on us, so it's been a real challenge," admitted Kevin Hagen with the Ontario Federation of Snowmobile Clubs (OFSC).

The weekend forecast isn't encouraging for trail conditions, with temperatures on the rise again. It could be the beginning of the end for the snowmobile season.

"I think there's going to be trails that are going to stay closed now," Hagen said. 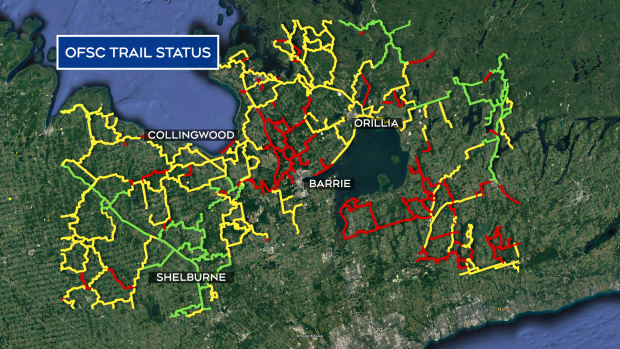 And it's not just the trails that have been affected by the weather rollercoaster this season.

A milder winter has made for unsafe ice conditions. Just this past weekend, a snowmobiler lost his life.

If venturing out, know the area, be prepared to self-rescue, have a safety plan in place and #tellsomeone. If in doubt, don’t go out #NoIceIsSafeIce #OPPSAVE ^rl pic.twitter.com/iS9qAYkNjl

"A milder winter has made for unsafe ice conditions," tweeted provincial police on Thursday.

After a deadly weekend on the ice, police issued a warning for snowmobile enthusiasts to take every precaution and "if in doubt, don't go out." According to the OPP, nearly half of all snowmobile deaths happen on frozen lakes or rivers.