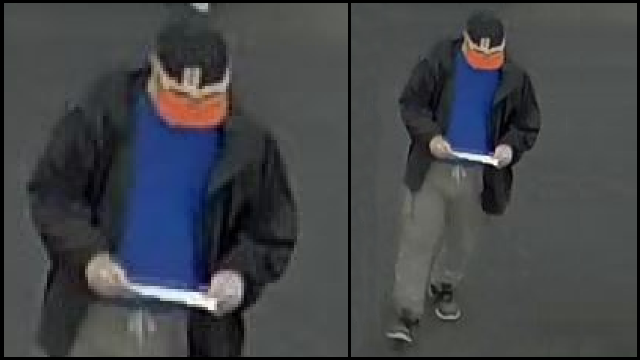 Image of a suspected shoplifter in Barrie on Sat., May 4, 2019 (Barrie Police Services)

Barrie police are looking to identify two men accused of shoplifting steak and chicken from a Walmart in the city's south end.

Police say the suspects appeared to carry a list with them as they made their way around the store with a shopping cart on the evening of Saturday, May 4.

The pair were being closely monitored on store cameras by the facility's loss prevention officers (LPO's). They say the accused put the items into bags they had brought in with them and walked out the front doors.

When approached by the store's LPO, police say one man gave up his bag of food, and the two accused ran from the store and headed east onto Mapleview Drive.

The first suspect is described as a white man, 45, wearing a grey hoodie, grey track pants and a baseball hat.

The second suspect is described as a white man, 30 to 40-years-old, wearing grey pants and a black jacket.

Suspects who stole meat and chicken from south end Barrie @WalmartCanada store came with a list and their own bags. If you can help #BarriePolice identify these suspects, please see https://t.co/OvpfsK662Y for details. @CrimeSDM pic.twitter.com/VOTxV4pXfw