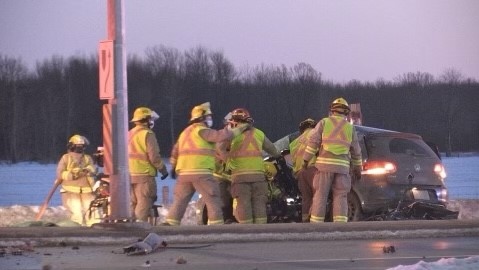 OPP have laid charges following an investigation into a fatal collision in Springwater Township.

On Feb. 20, just before 6:00 p.m., police were called to a crash between a pickup truck and a car on Highway 90 at George Johnston Road.

The driver of the car later died in hospital, and the passenger suffered serious injuries, according to police.

The 57-year-old driver of the pickup truck and his passenger were also taken to hospital with serious injuries.

'This is our land': Wet'suwet'en hereditary chiefs, pipeline opponents rally in Vancouver

Opponents of the Coastal GasLink pipeline currently under construction in Northern B.C took to the streets of Vancouver Monday, briefly blocking north-bound traffic on the Cambie Street Bridge.