More than one million more bees die off near Hanover

There is more troubling news for beekeepers.

Another die-off has a local producer sounding the alarm, and provincial inspectors have stepped in to get to the bottom of the issue.

Beekeeper Dave Schuit estimates that 1.3 million bees have died in his yard north of Hanover in the past 24 hours. Schuit says he has seen this before, and it looks like the bees have been poisoned

Neonicotinoids are extremely toxic to bees, even in tiny amounts. They are now widely used to protect corn, soy and wheat seed. The pesticide is water-soluble and persists in the environment for several years. Neonicotinoids were recently banned in Europe while more research is being done.

According to the Ontario Bee Keepers Association, the number of acute poisonings like this is mounting this summer and the total number of incidents is expected to surpass last year when 240 were reported. Laboratory testing confirmed the presence of neonicotinoids in 80 per cent of those cases.

Today inspectors from the Ministry of Agriculture collected samples for testing to see if the pesticide or something else is killing these bees. Results are not expected for several months.

In July, the province created a new working group made-up of bee keepers, farmers and scientists to look into the crisis.

Gerald Poechman is a farmer who is seeing this with his own eyes for the first time.

The province's new working group that is looking into bee mortalities is scheduled to have its next meeting early next week. 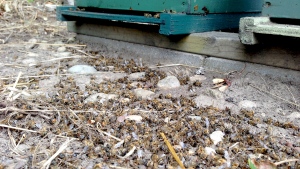 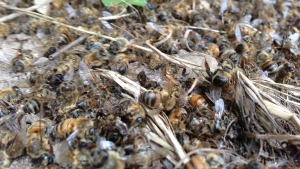