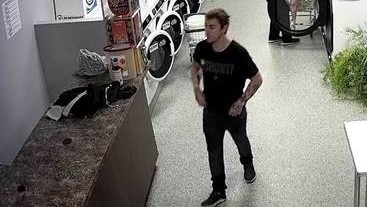 A surveillance photo of the man police believe to be connected to a car theft at an Orangeville Laundromat on Monday, October 25, 2021 (Courtesy: OPP)
Barrie, Ont. -

Police shared photos of a man they believe is connected to an alleged SUV theft from a laundromat in the Town of Orangeville.

Police say officers were called to the Fourth Street laundromat around 9:20 p.m. on Monday.

According to police, the complainant told officers that the "suspect entered the laundromat and removed her car keys from a counter and left in the vehicle," somewhere between 8:50 p.m. and 9:20 p.m.

The vehicle is a brown 2012 GMC Terrain.

The suspect is described as a white man, five feet eight inches tall, with a thin build.

He was wearing black jeans, a black t-shirt, black running shoes, and a black coat.

Police are asking businesses and residents in the area of Broadway and Fourth to check video surveillance for any suspicious activity or the vehicle matching the description.