Crews moving plane that crashed in Innisfil to Orillia today

The pilot of a Cessna 208 that crashed near Innisfil, Ont. Saturday, June 8, 2013 has been released from hospital and is home recovering.

The 53-year-old pilot works for the Toronto Skydiving Club and they say today he suffered minor cuts and bruises but is OK.

He was the only person in the plane at the time of the crash.

The pilot was heading back for a landing after letting off a couple of skydivers when the plane came down in a field short of the runway.

The Transportation Safety Board (TSB) of Canada was on scene last night and say they are looking into what might have caused the crash and hope to speak to the pilot soon.

"We're gathering information, facts ..." says TSB investigator Peter Rowntree, "to determine whether or not the Transportation Safety Board will conduct a full investigation into this incident or whether it's case-closed."

Manager of Media Relations John Cottreau says the decision to investigate will be made after the investigator has “had a closer look at the plane and a chat with the pilot.”

Cottreau says arrangements have been made to move the plane to Orillia today. Rowntree will be looking to speak to the pilot this week.

South Simcoe Police is also asking anyone who may have witnessed the crash to call.

--
Updated from the version below.

A small plane crashed into a field off the 10th Sideroad of Innisfil near the 3rd Line on June 8, 2013.

The single-engine plane went down this afternoon and the pilot was taken to hospital.

The pilot was the only person on board when the Cessna 208 crashed. He was taken to Royal Victoria Regional Health Centre, where he is being treated for minor injuries.

The plane is owned by the Toronto Skydiving Club, and the operations manager told CTV Barrie the pilot is experienced. He's been flying for three years with the club. He had just let out some skydiver and was getting ready to land the plane when he came up short of the runway.

It's still not clear why the plane came down suddenly.

Investigators with the Transportation Safety Board of Canada have been called in and will be looking into what happened.

--
Updated from the version below.

A small plane has crashed into a field off the 10th Sideroad of Innisfil near the 3rd Line.

South Simcoe Police say EMS crews are tending to the pilot. Police say the pilot was the only person on the plane.

There is no word on the extent of the injuries suffered or what exactly happened to the plane.

South Simcoe Police Service has confirmed officers are also on their way to the scene.

Watch CTV News at 6 tonight for the full story. 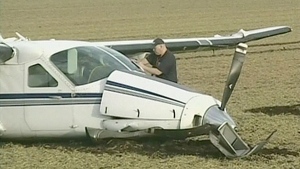 A small plane crashed into a field off the 10th Sideroad of Innisfil near the 3rd Line on June 8, 2013.