BARRIE -- Kingsley Corson walked back into school on Thursday with his dad by his side, just one day after a shocking attack at recess.

The kindergarten student has a few staples in his head to close the gash he got after being hit by a curtain rod. 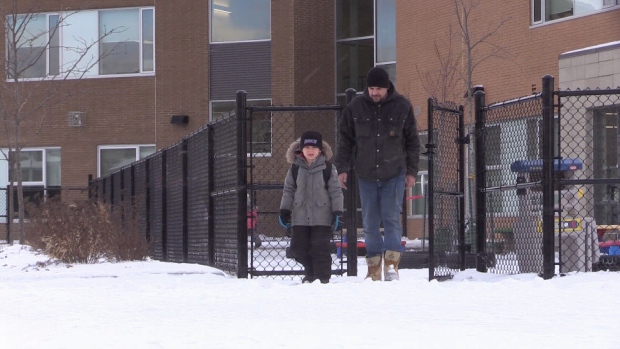 Police say a 30-year-old man wearing a helmet, who they are not identifying, scaled the fence to the schoolyard and started swinging a curtain rod at a group of kindergarten children, striking Kingsley.

The school immediately went into lockdown, and staff members quickly detained the accused.

"They did everything right. Beyond that, a teacher intervened, which is amazing and a Good Samaritan happened to be driving by, seeing what was going on, got out of his vehicle and also helped out," says York Regional Police Sgt. Andy Pattenden.

Police say the man is living with cognitive impairment and was arrested without incident.

"We are horrified that one of our students was injured in an incident at the school," says Ab Falconi, director of education.

The school board is working with police to review safety measures to prevent anything like this from happening again.

Kingsley's dad wants parents and their children to be aware of their surroundings and strangers, while five-year-old Kingsley just wanted to see his friends. His dad says his son's only request was that he wore his superman shirt to visit the school, "so I grabbed his superman shirt and said 'let's go.'" 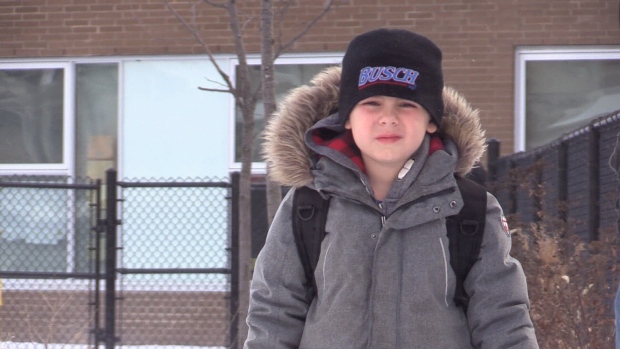 The accused faces several charges, including assault with a weapon.

Students and staff got a visit from the police therapy dog today, to help move forward from the frightful incident. unknown at this time.

Police say the suspect is being held in custody pending a bail hearing in Newmarket.

A five-year-old boy was seriously injured after a man allegedly started attacking kindergarten students with a curtain rod at an East Gwillimbury school on Wednesday.

Witnesses claim they saw a man hop over the fence into the area where the children were outside and start swinging a plastic curtain rod.

"He scaled the fence and came at them with the pole," describes a parent whose child was at the school and witnessed the event. "The parent volunteer monitor, she took this man down, she tackled him and got him to the ground and probably saved a lot of other children from being injured."

When officers arrived, the school was in lockdown, and all the students were inside. The suspect was in a vehicle with a family member after he was detained by school staff and a Good Samaritan.

Police say the 30-year-old man suffers a cognitive impairment and was arrested without further incident.

He is charged with aggravated assault, assault with a weapon, possession of a weapon for a dangerous purpose, and common nuisance - endangering a life.

According to police, the injured boy was taken to the hospital. His condition is unknown at this time.

Police say the suspect is being held in custody pending a bail hearing in Newmarket.