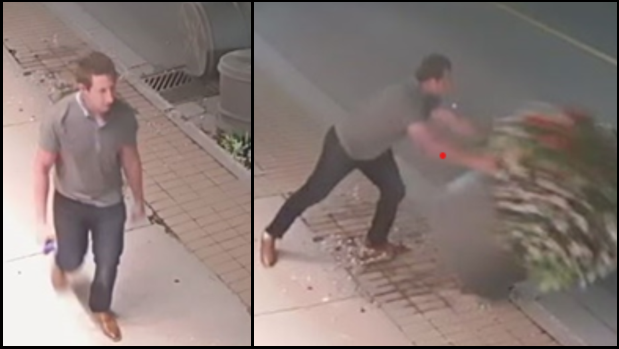 A surveillance image of a man who police say was tipping planters in the Town of Newmarket on July 29, 2021 (Courtesy York Regional Police)
Barrie -

Tips from the community have helped York Regional Police track down and charge a Newmarket man for damaging several planters in the Town of Newmarket.

Police say the incident happened along Main Street around 3:45 a.m. on July 29.

According to police, officers obtained surveillance video, which showed the 34-year-old acted alone while tipping over 16 planters. The damage is estimated to be $8,000.

The Newmarket man has been charged with mischief over $5,000.

The organization representing Canada's tourism industry is applauding the U.S. government's decision to allow Canadian travellers with mixed vaccine doses once the border opens in November.

Saturday at 7 p.m. on CTV: W5 investigates a theory that's not widely accepted in scientific circles, but is gaining ground: that North America's obesity problem is being fuelled by a physical addiction to highly processed foods.

Mounties in Nunavut have charged a man with first-degree murder in the May death of actress Emerald MacDonald.

A series of studies led by Dutch researchers have found that avoiding the news during the pandemic was correlated with better mental well-being.

Public Safety Minister Bill Blair says the government will continue to require travellers to provide proof of a negative COVID-19 test upon entry into the country so long as the Public Health Agency of Canada advocates for it.

The City of Iqaluit says testing shows a high concentration of fuel in a tank that supplies water to the Nunavut capital.

A small, angular rock that one Canadian physicist says looks like a chunk of black cheese has the potential to help scientists understand how the early solar system formed.

A NASA spacecraft named Lucy rocketed into the sky with diamonds Saturday on a 12-year quest to explore eight asteroids.