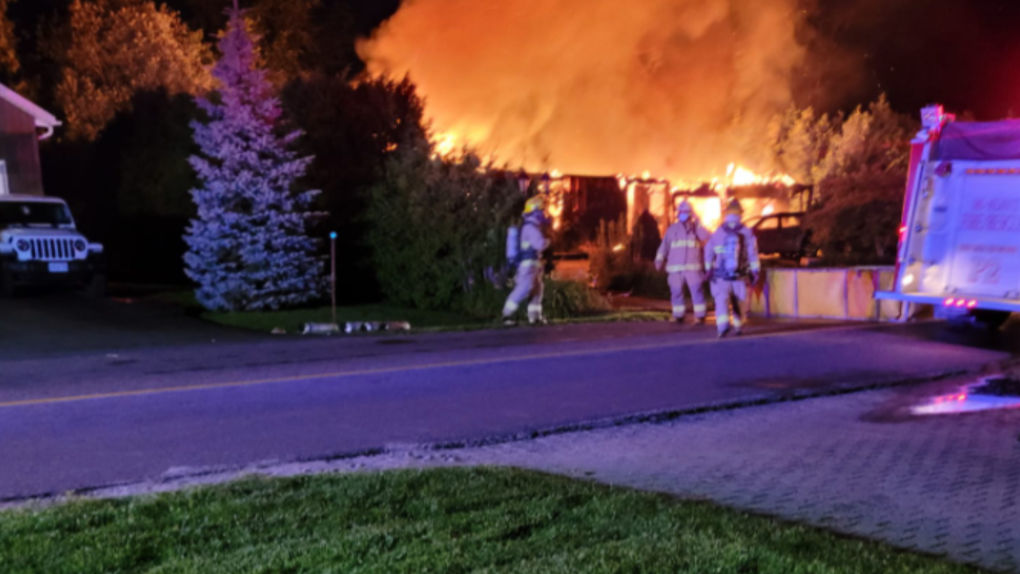 A home on Lakeshore Road East in Oro-Medonte was destroyed by fire early Friday.

Crews from four Oro-Medonte Fire and Emergency Services were called to the home near Sophia Avenue and 7th Line South just before 4 a.m.

Fire Prevention Officer Melanie Brown tells CTV News the fire alarms went off, alerting and allowing the elderly male inside the home to escape in time.

Fire crews shuttled water from tanker to fight the fire that had engulfed the home by the time the fire department arrived.

Brown says the cause of the fire is under investigation.

Huawei Technologies Chief Financial Officer Meng Wanzhou is expected to appear virtually in federal court to resolve U.S. charges against her, according to a source familiar with the situation.

The Canadian Armed Forces has confirmed that it will be sending resources to help with Alberta's overwhelmed intensive care units.

Gatineau police say the deaths of a father and his two young children at an Aylmer, Que. home were a double murder-suicide.

Ten months after Donald Trump lost his 2020 reelection bid in Arizona, supporters hired by Arizona Senate Republicans were preparing to deliver the results of an unprecedented partisan election review that is the climax of a bizarre quest to find evidence supporting the former president's false claim that he lost because of fraud.

The U.S. Centers for Disease Control and Prevention on Thursday endorsed booster shots for millions of older or otherwise vulnerable Americans, opening a major new phase in the U.S vaccination drive against COVID-19.

A source close to the family of Brian Laundrie says Gabby Petito's fiance, who is now the subject of a federal warrant, left his parents' Florida home last Tuesday without his cell phone and wallet.