Driver accused of impaired crashes into cemetery, landing on top of headstone 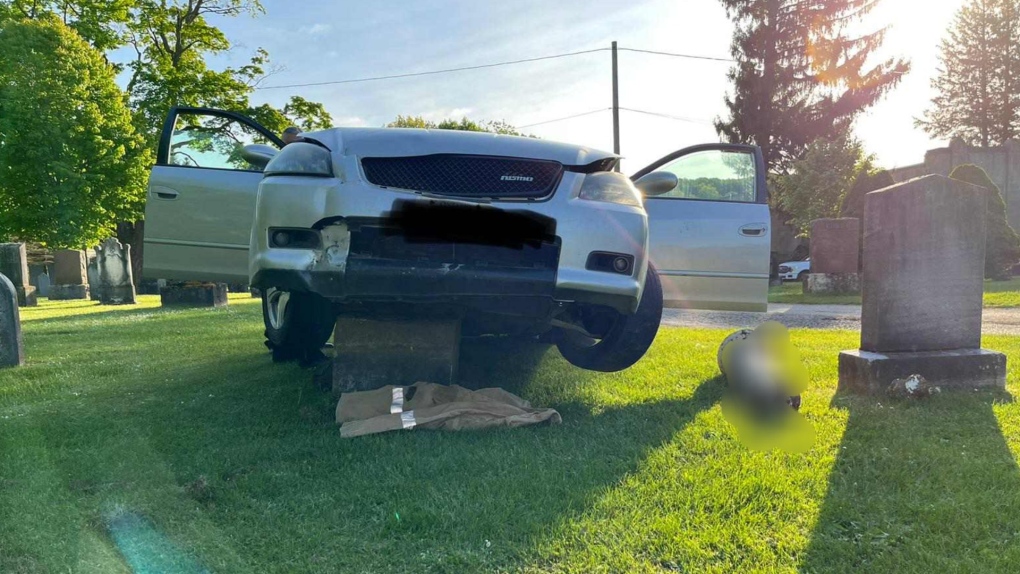 A car rests on top of a headstone at the Greenwood Cemetery after crashing through the Owen Sound, Ont., cemetery on Tues., May 24, 2022 (Owen Sound Police/Twitter)

An Owen Sound man faces impaired driving charges after allegedly losing control of his vehicle and going through a cemetery.

Owen Sound police said they responded to the incident shortly after 6:15 p.m. Tuesday.

When officers arrived, they said they found a silver Nissan Altima stuck on top of a headstone at Greenwood Cemetery with both front wheels off the ground.

Police said they seized open containers of alcohol from the man’s car.

The driver provided a breath sample, which police said showed his blood-alcohol level was nearly double the legal limit.

His license was suspended for 90 days, and his vehicle was impounded.

The accused will appear in court next month.

The U.S. Supreme Court has ended the nation's constitutional protections for abortion that had been in place nearly 50 years in a decision by its conservative majority to overturn Roe v. Wade. Friday's outcome is expected to lead to abortion bans in roughly half the states.

Canadian advocates are cautioning against complacency regarding abortions protections in place in Canada, after the U.S. Supreme court voted to overturn Roe v. Wade on Friday.

With the U.S. Supreme Court’s decision to end constitutional protections for abortion, 26 states are likely to ban abortions; 13 of which are expected to enact bans against the medical procedure immediately.

A Member of Parliament from rural Alberta went live on Facebook Friday to celebrate a United States Supreme Court vote to end constitutional protections for abortion.

Two people were killed and around 10 wounded on Saturday in a shooting at a nightclub in Norway's capital Oslo, Norwegian police said.

Miners working in a gold field in Yukon have uncovered what is being called the 'most complete' mummified woolly mammoth found to date in North America, officials announced on Friday.

An Ontario driver is speaking out after a shovel struck her windshield while she was driving on the highway.

This is who's in and who's out of Doug Ford's cabinet

Ontario Premier Doug Ford has unveiled his cabinet for the 43rd Parliament and there are some big changes to the front bench.