One downtown Barrie business will be the first to receive a free deployable ramp to become more inclusive.

The owner of Bohemia, an eatery on Dunlop Street East, reached out about getting a ramp with the StopGap Ramp Project after a would-be customer sent an email.

"She said she would love to come into my place but that she couldn't because she couldn't get in the door," explained owner Jill Dyck.

"With most of the buildings downtown being older, they aren't as accessible as we would like them to be. When they were built, it wasn't something that was considered at that time," said Sarah Jensen of the Downtown Barrie BIA.

"Some areas are great, but we have a lot of work to do with accessibility," said Yolanda Gallo, the regional Barrie StopGap Ramp Project coordinator.

The StopGap Ramp Project was founded by Luke Anderson in 2011 after a mountain bike accident left him with a spinal cord injury. The initiative has now placed more than 2,000 ramps worldwide to combat accessibility barriers. 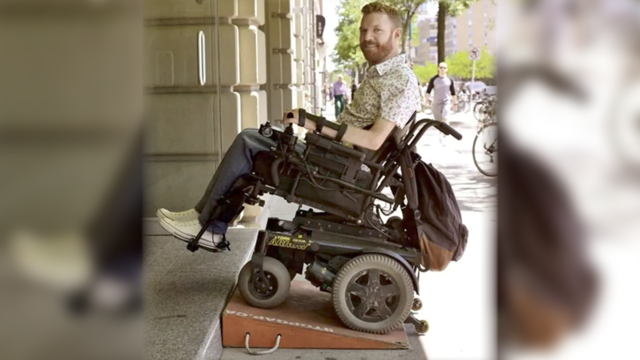 The StopGap Ramp Project was founded by Luke Anderson (pictured)

Jensen recalled her grandmother's struggles with accessibility in Barrie.

"She had a walker, and it was difficult to get into places sometimes – Bohemia being one of them – so I'm glad to see it's going to be a lot more welcoming now," she said.

"Kiwanis is all about serving the community, so this is all about being inclusive. Making accessibility for everybody," said Barrie Kiwanis Club president Tracey Craig.

"While we have funding, the ramps are free. Even if we don't have funding and they want a ramp, what we will do is we will try to find the funding to support the ramp. We are not asking businesses to pay for their own ramps. We will supply them with a ramp," added Gallo.

Daily accessibility is something many unknowingly take for granted. As much as these one-step ramps help physically, they also send a message.

"It absolutely tells your client base, your consumer, that we do care about you, we want your business, we want you to come in and feel welcome and feel like you are part of our community," believes Gallo.

"I don't have to think when I go to someplace whether I can get in or not. I think that's what we're kind of shooting for so that other people can be as thoughtless as me. They can just say I want to go there and get in. The end," said Dyck candidly.

The StopGap Ramp Project is hopeful that Bohemia will lead the way for other Barrie stores and remind owners they still have funding to provide more ramps to interested businesses.

"It's not that expensive, and it will make a big difference to the people that want to come in right now but are not able to," said Dyck.

Bob McGrath, an actor, musician and children’s author widely known for his portrayal of one of the first regular characters on the children’s show 'Sesame Street' has died at the age of 90.

Girl Guides of Canada is asking its members to vote on two new name options for its Brownies program -- comets or embers.

Former Toronto Blue Jays first baseman Fred McGriff has been elected to the Baseball Hall of Fame on Sunday.

Peel police have identified the 21-year-old woman who was fatally shot outside a Mississauga gas station overnight.