Eight people were injured, four seriously, when a tornado ripped through a Barrie, Ont., neighbourhood Thursday afternoon, leaving a trail of destruction in its wake.

During a press conference Thursday evening, Barrie Mayor Jeff Lehman said there were so far no fatalities.

"Everybody is accounted for, but it is early yet," he said.

Fire officials said crews were checking "under every bed and behind every door" to ensure no one was trapped in the rubble.

Officials said roughly 20 homes were damaged, and "about three or four" would have to be rebuilt.

Early Thursday afternoon, an Environment Canada tornado warning blasted over the airwaves and to cell phones as the skies darkened over the south end of the city and heavy rain fell.

Barrie resident Sheldon Murphy said they were in the kitchen when the warnings sounded.

"We saw stuff starting to fly around in the air, spinning. That's when we got everyone down in the basement. Then five minutes later, it started to clear up."

Environment Canada meteorologist Steven Flisfeder confirmed it was a tornado that touched down later in the day.

"At this time, based on images and videos, we can confirm that it was a tornado."

The storm lasted roughly 10 to 15 minutes and was followed by sirens as emergency crews headed to the Mapleview Drive and Prince William Way area.

"It looks very symbolic, unfortunately, to a war zone in places," said Barrie police spokesperson Peter Leon. "The damage is catastrophic. It is significant, and it is major." 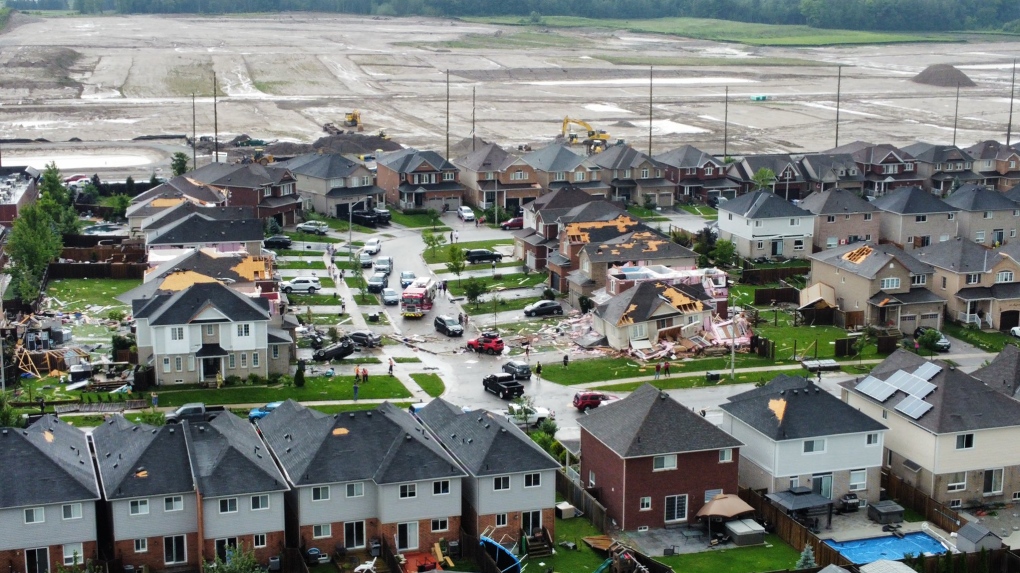 Lehman said the day's events brought him back to when a tornado hit the Allandale area in the 80s.

"I'm sure that people who lived through it in 1985, they can't believe, like I, that here we are dealing with another serious tornado in the city of Barrie.

But I can't tell you how incredible it is that nobody has been killed, and I hope that as all the secondary searches are completed, and the patients are treated at the hospital, that it continues to be the case. This certainly could have been a much more serious disaster," Lehman said.

The Barrie hospital's president and CEO, Janice Skot, said staff and physicians were on standby "should extra resources be required."

Additionally, Simcoe County Paramedics provided triage at Saint Gabriel the Archangel Catholic School to anyone injured in the storm.

Police are urging anyone who doesn't live in the area to avoid it.

Premier Doug Ford posted to social media expressing his sympathy for those impacted by the storm.

"My thoughts are with everyone in Barrie and Innisfil affected by the severe weather today. A big thank you to our first responders that are currently on the ground helping the situation. Please stay safe everyone!"

Environment Canada said it would send a team to survey the storm damage in Barrie.

Hundreds of protesters descended on the U.S. Supreme Court on Saturday to denounce the justice's decision to overturn the half-century-old Roe v. Wade precedent that recognized women's constitutional right to abortion.

After the Supreme Court overturned Roe v. Wade on Friday, holding that there is no longer a federal constitutional right to an abortion, protesters and supporters of the ruling gathered at the high court's building in Washington, D.C., and in other cities nationwide.

U.S. President Joe Biden on Saturday signed the most sweeping gun violence bill in decades, a bipartisan compromise that seemed unimaginable until a recent series of mass shootings, including the massacre of 19 students and two teachers at a Texas elementary school.

Rwanda to Germany: Canada to elevate small Commonwealth nations' concerns at the G7

Foreign Affairs Minister Melanie Joly says Canada will be bringing the concerns of smaller Commonwealth nations to the G7 leaders in Germany Sunday, particularly the growing threat of famine.

The family of Chelsea Cardno says the body found on flooded farmland adjacent to Mission Creek Friday night has been identified as the missing Kelowna woman.

Norway shaken by attack that kills 2 during Pride festival

Abortion is legal in Canada -- but is it accessible? Experts weigh in

There is a renewed conversation about abortion accessibility and rights for women in Canada after U.S. Supreme Court justices overturned the Roe v. Wade case on Friday, allowing states to ban abortions.

With the U.S. Supreme Court’s decision to end constitutional protections for abortion, 26 states are likely to ban abortions; 13 of which are expected to enact bans against the medical procedure immediately.