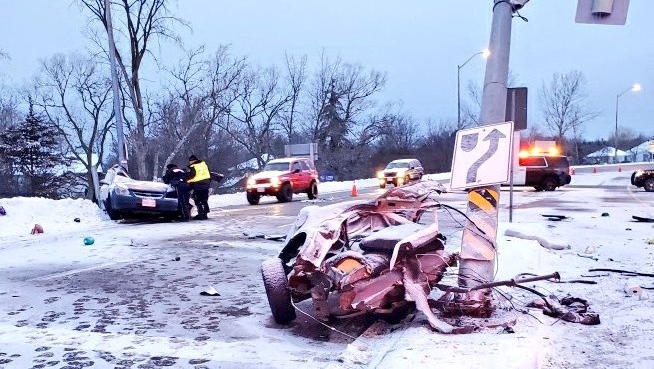 Two people are fortunate to have survived a crash that cut their car in half in Georgina, leaving one half by a light standard and the other half across the road. Mon., Jan. 13, 2020. (OPP Sgt. Kerry Schmidt/Twitter)

BARRIE -- Two people are lucky to be alive after the car they were travelling in was sliced in half in an early morning crash in Georgina.

It happened on Highway 48 near High Street around 5:30 on Monday morning.

The vehicle was cut in two, with one half wrapped around the pole and the other across the street.

OPP Sgt. Kerry Schmidt tells CTV Barrie the northbound vehicle lost control and hit a light standard. "Speed and alcohol" may have been factors in the crash, police say.

2 people lucky to be alive after car cut in half on #Hwy48/High St #Georgina
Speed is being investigated as a factor, one occupant with possible life altering injuries. pic.twitter.com/k2UWVGYKq1

Both occupants were taken to hospital, one with "possible life-altering injuries," but Sgt. Schmidt says they are both expected to survive.