'The energy that I felt, it's amazing:' Simcoe County Rovers president after player allegedly racially abused

'The energy that I felt, it's amazing:' Simcoe County Rovers president after player allegedly racially abused 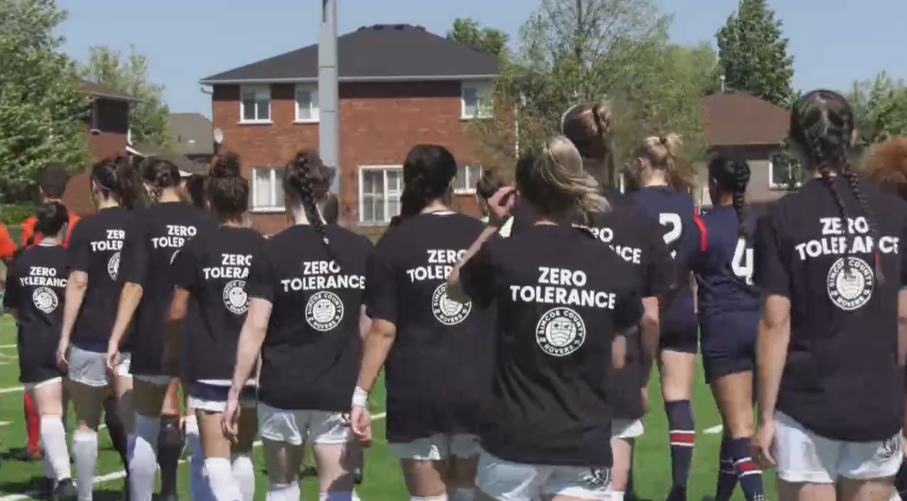 The Simcoe County Rovers took to the field for the team's first game on Sat. June 18, 2022 since a player was allegedly racially abused (Dana Roberts/CTV News Barrie)

The Simcoe County Rovers FC took to the field Saturday afternoon for the team's first game since a player was the victim of alleged racial abuse.

On Saturday, the team played host to Vaughan Azzurri in Barrie Saturday afternoon. The game started with members of both teams taking a knee, a symbolic gesture against racism.

"I think the group is coming together, and when I was in that change room, the energy that I felt, it's amazing," says Julian De Guzman, the team's owner and president. "I mean, they are so strong, and they are so unified."

On Thursday, the team was playing a game in Peterborough when a fan from the opposing team, the Electric City Football club, allegedly directed racial abuse toward a player.

De Guzman, a former player and coach, says, unfortunately, incidents like this do happen. He spoke with the players ahead of Saturday's game, saying the most important thing is to share the experience as a group.

"I kind of use that and channel it into something positive, and this is what has pushed me in my career and anything I do in life," says De Guzman. "I know there's always going to be the hate and the jealous and the competition, and that's what it comes with, but I always try to find a way to channel that and put it into a different light."

Since the incident, De Guzman says the support he and the team have received has been overwhelmingly positive.

League1 Ontario said an investigation had been opened to identify those who are responsible for the alleged attack.

"One thing I warned them was if you're doing that well, you are going to always have these hurdles to approach, and you're going to have a target on your back pretty much," says De Guzman. "So they've found a way to really grow the group even stronger, and that's the message that I left with them, and that's exactly how they feel. If it's not going to break you down, it's going to make you stronger."

On Thursday, the Electric City Football Club from Peterborough posted on social media that a select group of fans had been suspended from attending home matches until the investigation was over and an "appropriate course of action" had been determined.

"The Club will be making no further comment on the matter until the investigation is completed," it concluded.

De Guzman says his players have handled the situation with the utmost professionalism.

"Our job is to continue to raise the awareness, for the individuals that have to go through this and suffer, it's our job to make them keep believing in themselves pretty much," he says.

Four more ships carrying agricultural cargo held up by the war in Ukraine received authorization Sunday to leave the country's Black Sea coast as analysts warned that Russia was moving troops and equipment in the direction of the ports to stave off a Ukrainian counteroffensive.