More than 200 orange ribbons hang from the branches in Huntsville's River Mill Park, each representing a documented child found somewhere unearthed in Canada.

It's part of a project called Hope Arises.

Joyce Jonathan Crone co-created the project earlier this year after the first discovery of mass graves on the grounds of former residential schools.

"When it became known to Canada and the public, we felt that we could not sit idly by and even though it's a sad time, it's a remembrance time I feel that there's still hope," Jonathan Crone says.

But since the ribbons went up, they have become a target for vandalism. And although other displays in the park appear untouched, police do not believe it's hate-motivated.

"It's particularly sad that someone would take the time to vandalize something that is so meaningful and something that should be so recognized by our community," says Huntsville Mayor Karin Terziano.

Still, the community is focusing on moving forward, with several businesses displaying orange ribbons for people to hang in their homes.

"We are all trying to find ways to have reconciliation and for us to learn, so I am grateful to be in a position to support that," says Catherine Cole, The Great Vine owner.

Each ribbon bears the name and date of a child who died in a residential school.

And each one was handwritten by Wayne and Shirley Taylor. 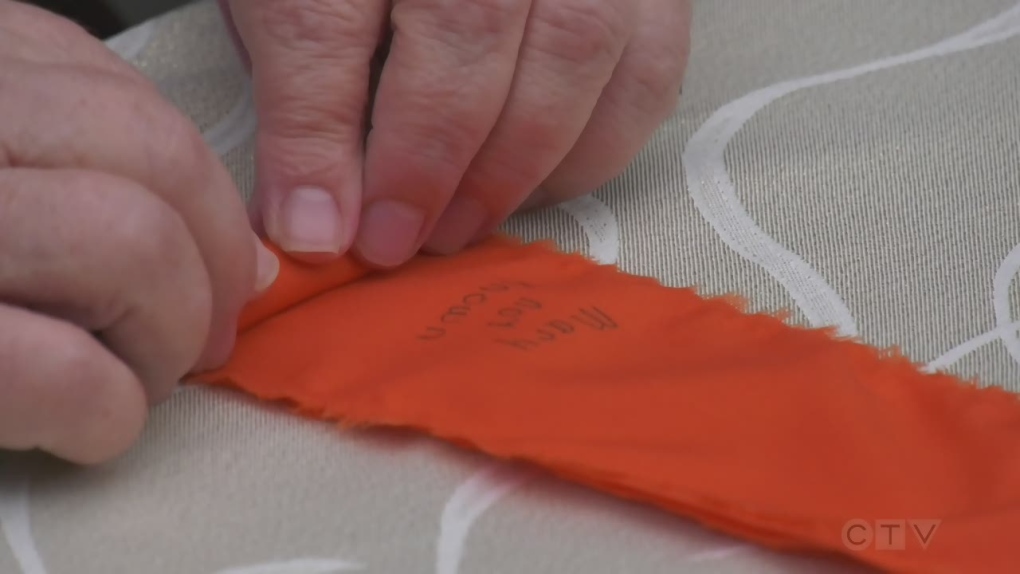 "We are just trying to do our part, and as we roll these, we acknowledge that they were here, and many of them never came home," Shirley explains.

Because of the community's efforts, Jonathan Crone says they won't give up. "Part of the truth is hard for people to swallow and understand, but until that happens, we will just keep pressing on and going forward."

The first National Day for Truth and Reconciliation is on Thurs., Sept. 30.

Jonathan Crone says the hope is that the park in Huntsville will become a sacred space for Indigenous and non-Indigenous people to come, remember and heal.

The federal Conservatives—the only caucus yet to confirm how many of its MPs remain unvaccinated—have come out in opposition to the new mandatory COVID-19 vaccination policy announced by the House of Commons. The decision taken by a cross-party committee of MPs that means that as of Nov. 22, anyone entering the House of Commons precinct will need to be fully vaccinated against COVID-19.

What appears to be human remains and items belonging to Brian Laundrie, including a backpack, have been found in a nature reserve in North Port, Florida, according to FBI Special Agent in Charge Michael McPherson.

As Canada's first Indigenous Governor General, Mary May Simon says part of her role entails bridging the gap in understanding between governments and Indigenous communities.

Health Canada is reminding Canadians that ivermectin should not be used to treat or prevent COVID-19, after poison control centres saw an increase in reports about the anti-parasitic drug over the summer months.

Ontario Premier Doug Ford said he believes opposition parties are playing politics over his comments on immigrants and said he's been told his remarks were 'bang on.'

A report exploring the far-right in Ukraine’s military found that neo-Nazis and supporters of far-right groups in the ranks bragged online about receiving training from Canada and other NATO nations.

Prosecutors pursuing the case against a man accused of raping a woman on a commuter train last week don't anticipate charging fellow passengers for not intervening, a spokesperson for the suburban Philadelphia district attorney said.

Ontario Provincial Police are investigating after multiple animals, including calves and piglets, were found abandoned on a farm in Haldimand County in southern Ontario.