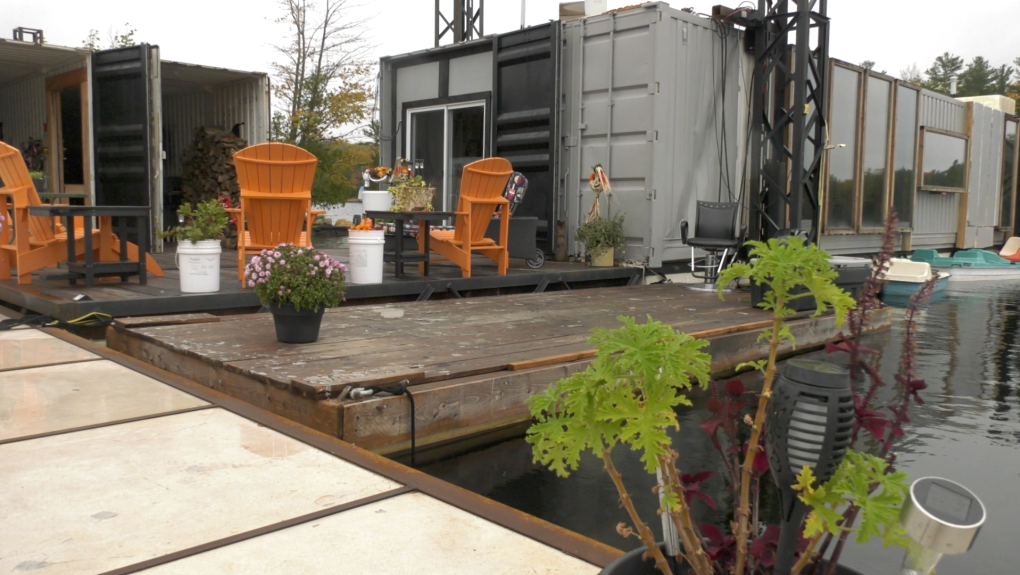 Imagine taking in the views of Muskoka, Prince Edward County or even the Toronto Skyline all from the comfort of your living room.

Last year, a Port Severn man made his childhood dream a reality by creating a houseboat, or a floating cottage, that can travel up and down the Trent-Severn waterway.

"I just always wanted to have a home on a boat," said Joe Nimens.

While mulling over several design ideas, he settled on building the houseboat out of shipping containers that would sit atop a floating steel hull.

"It has all the comforts of a Northern Ontario home," said Nimens while sitting next to his partner Erin Morano.

"We wanted this aesthetic. We wanted to live in a box that's been travelling around the world," Nimens added.

The welded-together shipping containers now feature a fireplace, full kitchen and washroom, and internet. All of which is powered by solar panels.

The home also comes with a system that protects the 53-foot boathouse from large waves and when the lake freezes over.

"Our houseboat is equipped with four jack-up spuds. They do two things; they drop down and sit on the lake bottom; they don't have to dig in like an anchor would; they can just sit on the surface and hold us in place. But also, we can use them to lift our whole house out of the water like oil rigs do," said Nimens from his couch overlooking Little Lake in Port Severn.

The unique floating cottage has caught the eye of many locals.

Joe and Erin say hundreds of people have stopped to ask questions and take a tour.

The overwhelming attention has led the couple to turn their project into a business called Living Outside the Box (LOTB).

According to their website, LOTB can build a "tiny cottage" of around 240 square feet of living space starting at $46,000.

This design would feature one bedroom and bathroom, a kitchenette, a solar system, and a two-spud anchoring system.

Joe and Erin's model cost them around $450,000, but they say they wanted to build an elaborate model to showcase their work.

"We don't know what people are going to want from here forward, whether they want something similar or bigger, or maybe smaller and more simple, but we wanted to build something big and elaborate," said Nimens.

Over the next few months, the couple plan to put the finishing touches on their houseboat before drawing up design plans for their first customer.

"We plan to live the rest of our lives moving around the waterway," said Joe Nimens.

Dale MacEachern of Parks Canada says the structure "has not been permitted by Parks Canada for use on the Trent-Severn Waterway."