Springwater Provincial Park will reopen after a five-year deal was agreed to between the Beausoleil First Nation and the Province of Ontario.

The gates will reopen thanks to the unique deal between the two sides.

“It’s our treaty territory, Treaty 16, so for us to be able to do something beyond our First Nation. Ontario has given us the opportunity to prosper and it’s time for us to showcase ourselves, not only ourselves but also as Ontarians that we can be successful at economic opportunities just like they can,” says Beausoleil First Nation Chief Roland Monague.

Springwater Provincial Park was deemed non-operational in September 2012. The province said there weren’t enough visitors and it was losing money. Les Stewart fought to keep the park open and helped push for the new partnership.

“It’s really important that people be able to drive in and use the facilities and see the ponds and the pavilions. This is a very important area in our community, has a history back to 1922,” says Stewart.

Beausoleil First Nation will be responsible for the maintenance and general operation of the park. The park will be staffed by a member of the First Nations community and someone from Ontario Parks.

The park has always been for day use only and it will remain that way for at least the next three years, but Monague says there is a possibility overnight camping could be allowed in the years to come.

“We got a lot of planning to do to make it there, what we want to do is add a cultural component to this park which includes bringing in crafts people, vendors, Pow Wows,” adds Monague.

Attractions that might help keep the park going for a long time.

“We don’t have a lot of parks around Barrie and it’s such a large, open space, I’m hoping people will realize the jewel we do have and actually start frequenting it a lot more than they had maybe for the last few years,” says Springwater Mayor Bill French.

An official opening ceremony is scheduled for July 31. 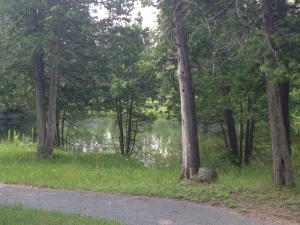 A look at inside Springwater Provincial Park.