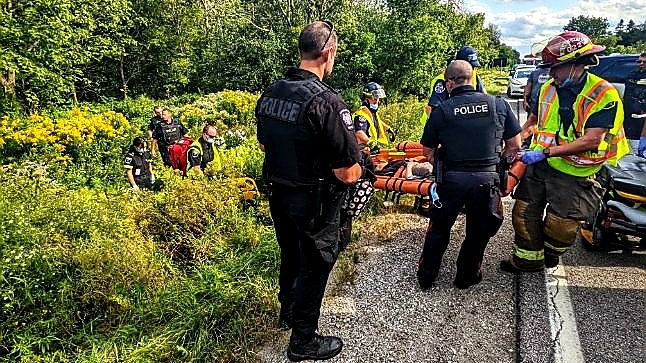 Police, firefighters and paramedics help carry a woman from a wooded area after a multi-vehicle crash on Sat., Sept. 11, 2021, on Sideroad 10 in Innisfil, Ont. (South Simcoe Police/Twitter)
Barrie, Ont. -

Police, firefighters and paramedics carried an injured woman out of the woods after officers say she ran from a multi-vehicle crash in Innisfil.

South Simcoe Police say the woman was driving north on Sideroad 10 just south of Highway 89 on Saturday afternoon when she hit the vehicle in front of her.

Police say she then veered into oncoming traffic and struck a VW Jetta head-on, causing an SUV to smash into the back of the Jetta and crash into a ditch.

Witnesses told officers the woman got out of her car and ran into a nearby wooded area.

The bystanders told police she had been injured and described her appearance.

Police called in the K9 unit to help find the woman who they say was the lone occupant of her vehicle.

"K9 Nitro began to track into the wooded area and a short time later located the woman concealed under very thick foliage," South Simcoe Police stated in a release on Monday.

Police say she was unresponsive and had to be carried out by emergency crews and taken to the hospital.

Two other people were also injured in the collision and taken to the hospital.

Police say all of the injuries are considered non-life-threatening.