Georgian College is the first college in Canada to test a new firefighter mixed reality simulation.

The school is one of the world leaders in exploring and integrating virtual reality into curricula.

"By mixed reality, what I mean is a combination of virtual reality glasses combined with real-world objects like the fire hose," said Rob Theriault, the Immersive Technology Manager at Georgian College.

The simulator also includes a thermal imaging camera and a vest that heats up to 100 degrees Fahrenheit as you get closer to the flames.

In its early stages, the technology is receiving positive feedback from firefighters.

"They're quite impressed with the realism of the experience. Particularly the weight of the hose and the tension on the hose when you try to move forward as you would with a real hose," added Theriault.

The mixed reality simulation is a potential new valuable tool for training.

"It just makes you think in a three-dimensional state. It's not just going to a video game where you're walking into nothing. It allows you to assess your hazards and make a proper decision based on those," said training officer Nicole Brugger who participated in the exercise for the first time Wednesday. 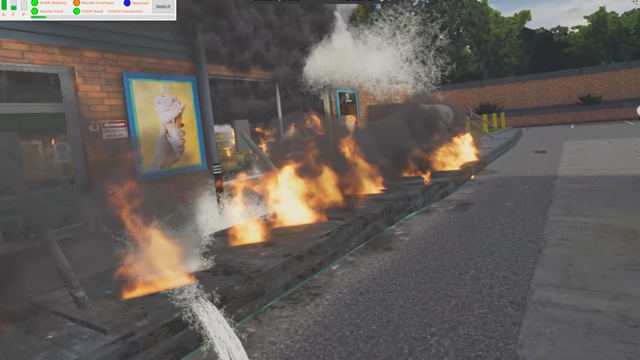 "It's really valuable for developing muscle memory, for knowledge of procedural tasks. So that fire students have a good solid foundation before they go to real fire practice," echoed Theriault.

It's also a much safer training ground for fighting fires.

"We want to step away from putting ourselves in class-A burns just because of the cancer-related pullbacks from that, but the fact is that you can't do live fire training without live fire, and this gets you a little closer to doing it, like we would on scene," said Brugger.

The early research is already showing positive results for students at Georgian College.

"When students do things with their hands in a virtual environment, it translates to better retention of those skills and the sequence of those skills," pointed out Theriault.

Virtual reality isn't just for fire training at Georgian College. It's also used for architecture, nursing, and indigenous language studies, among other programs.

"It's really an opportunity to do some hands-on experiences and field trips in some cases that would otherwise be impossible," said Theriault.

The school plans to integrate more artificial intelligence and biometrics into virtual reality to enhance simulations and the student learning experience.