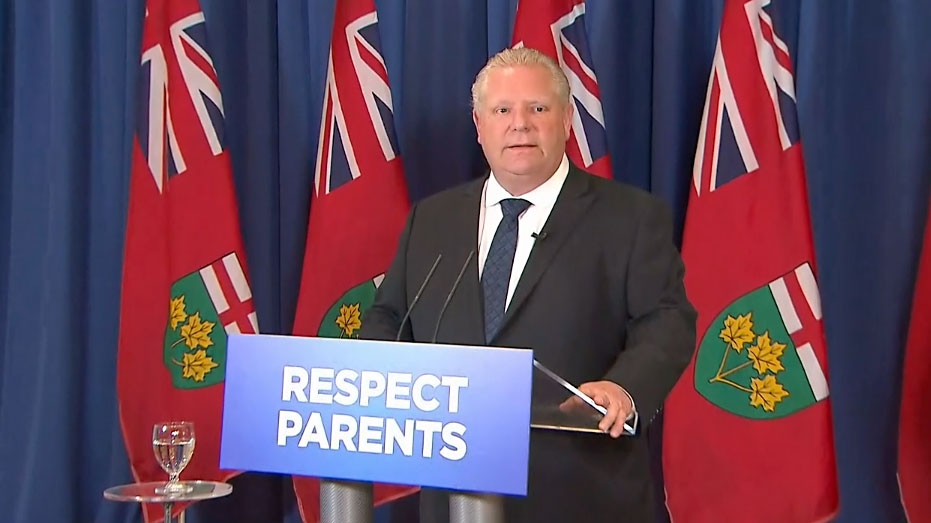 Ontario PC Leader Doug Ford speaks to reporters at a news conference on May 8, 2018.

He did not provide details of how that process would work, but said universities are supposed to be a place where people exchange ideas and have respectful and responsible debates, but too many schools are putting limits on that.

"For too long the Liberals have ignored Ontario parents," Ford said Tuesday. "They have introduced the sex curriculum based on ideology -- a curriculum that teaches sensitive topics starting at an early age."

Ford said in a news release that under Premier Kathleen Wynne "our schools have been turned into social laboratories and our kids into test subjects for whatever special interests and so-called experts that have captured Kathleen Wynne's ear."

He wouldn't say at a news conference Tuesday what parts of the sex-ed curriculum he takes issue with, only that parents were not consulted enough.

Ford dropped an anti-sex-ed advocate as a candidate over the weekend after homophobic statements she made were brought to light by the governing Liberals. Tanya Granic Allen had also run for the party leadership and threw her base of social conservative support to Ford.

Granic Allen called her removal a "betrayal" of social conservatives, and she said she hoped that Ford would at least promise to repeal and replace the sex-ed curriculum.

NDP Leader Andrea Horwath criticized Ford's pledge on sex-ed, saying the old curriculum the Tory leader is vowing to bring back was the same one in place when her now 25-year-old son was in school.

"There's no doubt that curriculum needed to be upgraded, New Democrats supported that," she said. "I think Mr. Ford may be considering dragging our province backwards on this front and on many other fronts."

Ford also said that with half of Ontario's Grade 6 students not meeting a provincial math standard, schools need to get back to the basics.

"Kids used to learn math by doing things like memorizing a multiplication table and it worked," Ford said. "Instead, our kids are left with experimental discovery math. That hardly teaches math at all. Instead, everyone gets a participation ribbon and our kids are left to fend for themselves."

In April 2016, Ontario announced a three-year, $60-million math strategy that puts an average of 60 minutes per day of "protected math learning time" in the curriculum for students between Grade 1 and Grade 8.

The following year, only half of students in Grade 6, and 62 per cent of those in Grade 3 met the provincial standard in math. The dismal results prompted Premier Kathleen Wynne to announce the province would look at overhauling its math education program.