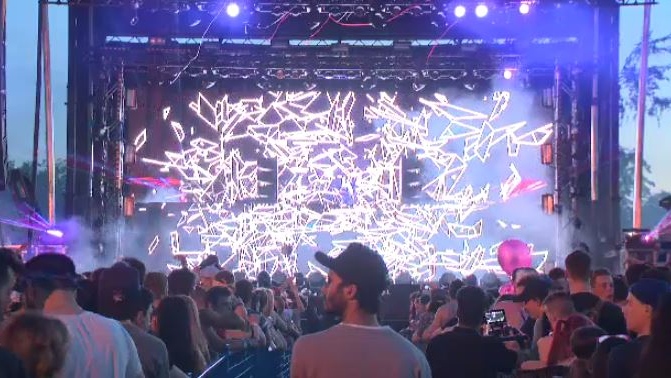 Thousands attend the Ever After Music Festival held in Kitchener. June 3, 2016

In a post to social media, ticket holders for the Ever After Music Festival are told to "plan accordingly" after it says the township will not let the event go forward.

Organizers say a full statement will be posted shortly as nothing is expected to change "at this time."

A post shared by Ever After Music Festival (@everafterfest)

The news comes a week before the popular electronic dance music festival is slated to run Aug. 11-14 at Burl's Creek in Oro Medonte.

According to the township, the festival leased the land from Burl's Creek to hold the event.

In a special council meeting on July 21, a staff report said that event organizers anticipated around 15,000 people would attend the festival daily.

Mayor Harry Hughes told CTV News in an interview last week that the organizer was told in January about the township's process that involves six different agencies signing off on the festival's operation plans for health and safety purposes.

"When the report came to council, none of the agencies had signed off, nor had there been any securities posted to make sure people were paid in conjunction with the event," Hughes said.

Those agencies include the OPP, who wrote a letter on July 19, saying, "The OPP first learned of this event in late May 2022 and did have one meeting with the event organizer," according to detachment commander and inspector C.J. Yateman.

A letter was also submitted by the Alcohol and Gaming Commission of Ontario on July 18, stating, "The AGCO has not received the required ten-day notification for this event. The AGCO does not approve event plans and supports any decision from the township of Oro-Medonte."

With an official cancellation statement now looming, there is no indication of what will happen to the purchased tickets or if the festival will offer refunds.

CTV News made multiple attempts to reach the organizer for comment but has not yet heard back.

There have never been so many renters in Canada, RBC report says

Royal Bank of Canada economists say the country has reached a record number of renters as the number of people renting has increased at three times the rate of homeowners in the past decade.

Putin calls nuclear weapons a tool of deterrence in Ukraine

Russian President Vladimir Putin on Wednesday hailed the annexation of Ukrainian territories as a major achievement and said his country's nuclear weapons serve as a tool of deterrence in the war that the Kremlin calls a 'special military operation.'

Polygamous leader had 20 wives, many of them minors: FBI

The leader of a small polygamous group near the Arizona-Utah border had taken at least 20 wives, most of them minors, and punished followers who did not treat him as a prophet, newly filed federal court documents allege.

The Royal Canadian Mint is issuing a new $2 coin with a black ring in honour of the late Queen Elizabeth II.

Bank of Canada raises key interest rate to 4.25 per cent, its highest since 2008

The Bank of Canada has raised its overnight rate by 50 basis points to 4.25 per cent, marking its seventh rate hike in nine months. The last time the bank’s policy rate was this high was in January 2008.