TORONTO -- The cleanup has begun in a Barrie, Ont. neighbourhood after Environment Canada says an EF-2 tornado tore through the area Thursday, injuring at least 10 people and damaging multiple houses in its path.

The premier called the devastation "shocking" as he pledged his support for those impacted.

Barrie resident Anita Heyworth said Thursday night the storm happened quickly as she pulled into her driveway. "All I saw was this tunnel going down the street and my trampoline from our backyard spinning in the tunnel, and I'm screaming 'Duck' to my children because I was afraid of the glass being shattered."

On Friday, officials at Royal Victoria Regional Health Centre said 10 people were admitted to the hospital, two with serious but non-life-threatening injuries. They said most were treated and released.

Tyler Musgrove said he was injured by flying debris. "I'm lucky I survived it, to be honest. It was probably the most terrifying thing I've ever been apart of. I got seven stitches in my right arm, and I got cuts and bruises all over me from stuff hitting me."

Barrie Mayor Jeff Lehman credited the fast work of the city's emergency responders and neighbouring York Region who rushed to the area.

"The character of a community is defined by its response to its most difficult days, and this is one of them," Lehman said Thursday night.

On Thursday, the fire chief estimated 20 to 25 homes suffered structural damage, and "two or three" were destroyed.  By Friday afternoon, the number of homes deemed unsafe jumped to over 40.

Police started escorting some residents back into their homes for whatever possessions could be recovered.

"The work will continue today to assess house by house, the condition of buildings and try to get everyone the help they need," Lehman added.

In a preliminary report issued Friday morning, the national weather agency says that the tornado caused a path of damage approximately five kilometres long and up to 100 metres wide in the city north of Toronto.

The twister had a maximum wind speed of 210 km/h, Environment Canada said, and there may have been additional damage as the storm moved out of the city and over Lake Simcoe.

Heyworth said the destruction on Thursday brought her back to 36 years ago, when an EF-4 tornado ripped through the city's Allandale area, killing eight people, including four children, and injuring more than 100 others.

On May 31, 1985, residents of Barrie had no warning when the twister touched down. 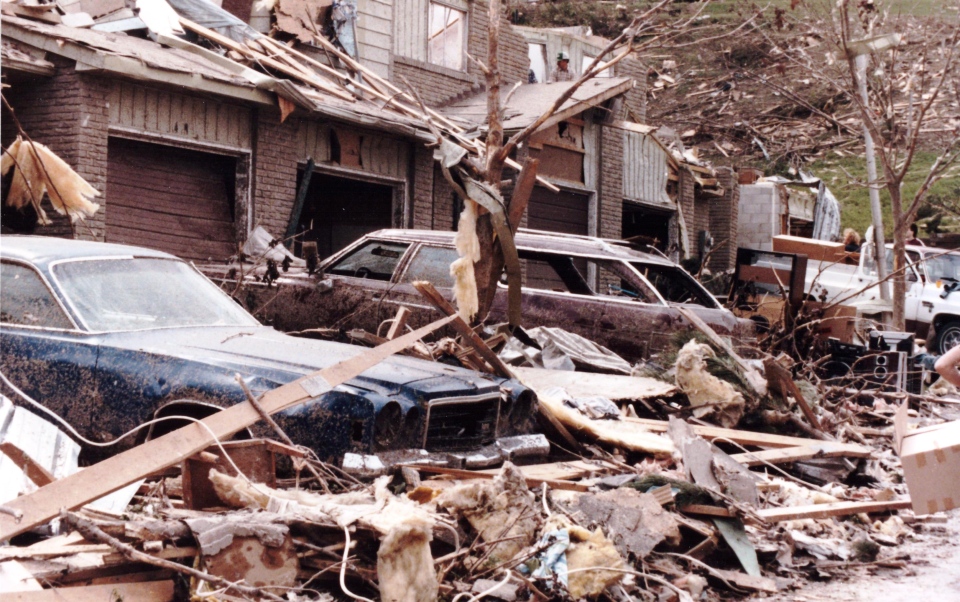 Six hundred homes were ripped from their foundations as the storm shredded neighbourhoods.

"The scenes today are reminiscent of it," Lehman said. "I lived in that neighbourhood as a boy. I mean, it's shocking, you know, you never expected to see it again."

Rebuilding took years and what would now be roughly one billion dollars.

A complete photo gallery of the Barrie tornado in 1985 is available here.

With files from Ryan Flanagan