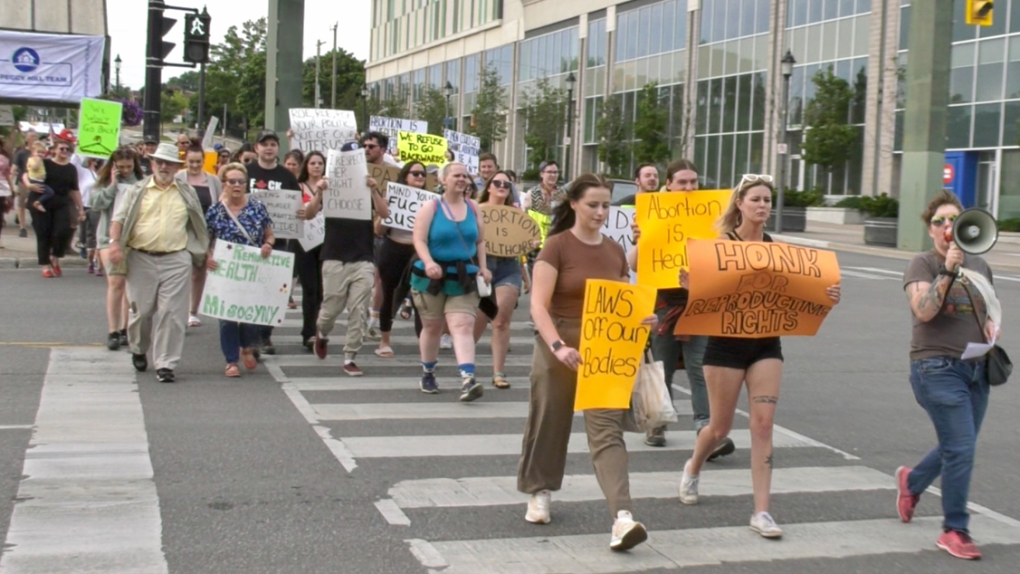 The rally began at city hall and moved to Meridan Square, where demonstrators spoke to the crowd.

Organizers say they're also hoping their voices can be heard to improve access to abortions for all Canadians.

"I think the community is saying its message loud and clear that we are not going to stand for a roll back of abortion rights in this country," said Barrie City councillor Keenan Aylwin.

Similar protests have been arranged across Ontario, including outside the American embassy.

Abortion was decriminalized in Canada in 1988 due to a landmark decision in which the Supreme Court of Canada struck down a federal law. Since then, there's been no legislation that was ever passed to replace it.

Agent: Rushdie off ventilator and talking, day after attack

'The Satanic Verses' author Salman Rushdie was taken off a ventilator and able to talk Saturday, a day after he was stabbed as he prepared to give a lecture in upstate New York.

Parent of child with rare form of epilepsy distressed over N.S. ER closures

Kristen Hayes lives close to the hospital in Yarmouth, N.S., but she says that twice in the past month, her son, who has a rare form of epilepsy, has been taken by ambulance to the emergency room there, only to be left waiting.

Average rent up more than 10% in July from previous year, report says

Average rent in Canada for all properties rose more than 10 per cent year-over-year in July, according to a recent nationwide analysis of listings on Rentals.ca.

Volunteers armed with smartphones are using a 3D-modelling app to preserve Ukraine's cultural heritage one snap at a time.