BARRIE -- The City of Barrie will be doling out a total of $30,000 to pay for a controversial soapbox installation downtown.

The art piece consists of three painted aluminum soapboxes, currently in front of city hall. The boxes were designed by Minden-based, but internationally recognized, artist-duo Chris Hanson and Hendrika Sonnenberg. Their work has also been featured at the Friedrich Petzel Gallery in New York City, and in the Art Gallery of Nova Scotia.

On Monday night, Barrie resident Sean Barton spoke out against the funding of the artwork. "It seems to be a frivolous and unnecessary expense," he said from the podium. He suggested the money would be better spent on housing.

The city has been paying for the installation since 2017 when it entered into a lease-to-own agreement. It has already paid $15,000 and now plans to pay another $15,000 to own the piece. 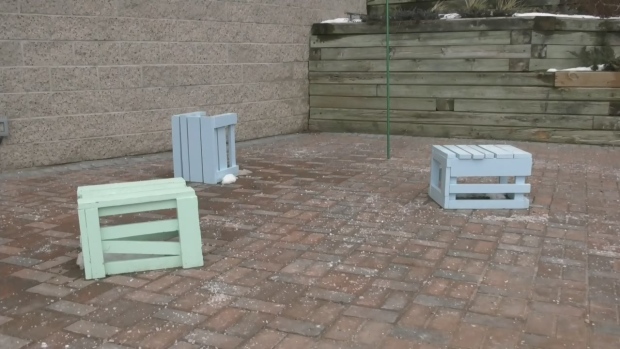 Councillor Natalie Harris pointed out that the money must be spent on art. "The funding's coming from the Barrie public art reserve, so this money was already set aside. It's not like we can use the $15,000 that wasn't spent, and use it for the things that [Barton] mentioned."

Councillors also argued that it's not up to them to decide what constitutes good art, saying that decision should be left to the city's art committee.

"This art piece, I can tell you, without a shadow of a doubt, I don't like it. I really don't. I don't get it," admitted Councillor Mike McCann. "But you have to trust the people that you're delegating responsibility to."

"I don't think any of us were elected to become public art professionals," added Councillor Gary Harvey.

Vice-Chair of the city's art committee, Carol-Ann M. Ryan, pointed out the soapboxes were initially part of a larger series of artwork put up to celebrate Canada's 150th anniversary. "They refer back to that old saying 'get up on your soapbox'. They recognize freedom of speech, freedom of expression, fundamental Canadian rights."

Councillor Sergio Morales was the only councillor to vote against providing the additional $15,000 to pay off the art piece.