An arrest has brought some closure for the family and friends of a Barrie man who was killed in a hit and run late last week.

Barrie police say they received information late on Thursday afternoon that led them to a 37-year-old Barrie man who is now facing serious charges.

The victim, Luke Crocker, a 33-year-old father of three, was struck and left for dead on Nov. 1st at 2:45 a.m. at the intersection of Wellington and Toronto streets.

After learning of his death, Crocker's friends were left with their grief and outrage.

"I'm angry that someone would hit him and just leave him there," said the victim's longtime girlfriend Jenna Zardo to CTV News on Thursday as police continued their search for the driver responsible.

Friends and family of Crocker posted several tributes on a Facebook page, including the man's father who was tasked with identifying his body. 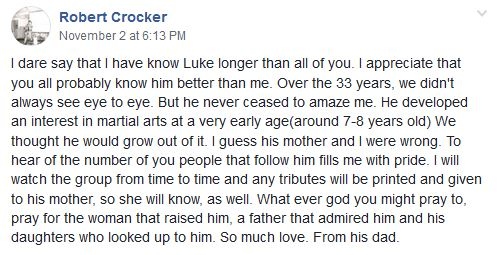 The accused faces a criminal charge of failing to remain at a fatal accident.

Police have not released the suspect's name at this time.

He is scheduled to appear in a Barrie court on Wed., Dec. 18th.