A popular route has returned to Arrowhead Provincial Park, where the skates are out on the ice trail.

It's a real winter treasure to take in.

“We were getting up to 140 calls a day, people dying to know when it opened,” says John Leadston at the park.

Some call the giant oval the best kept secret for skating in Ontario.

“I was expecting something gorgeous and this definitely hits the mark,” says Joy, who came up from Toronto.

The Arrowhead Provincial Park skating rink is 1.3-kilometers long, making it the longest outdoor man-made skating rink in Ontario. And it takes a lot of water on this rink to make it this beautiful.

The rink has only been open for four days. Admission is $14 per vehicle and skate rentals are available for $6.

Today was the Chekchik family’s first time on the rink; they just moved to Canada from Israel and they're keeping family members at home update on their new adventures.

“We're sending them pictures and some video of us out here and they think we’re kind of crazy for going out in this weather,” says Hadar Chechik.

And when the Chechiks finish playing on the ice, Toronto resident Morley says they can send pictures of themselves playing in the snow with some of the other things they can do here at Arrowhead.

“It's got all the activities that we like to do,” says the Toronto resident. “We'll skate today, snowshoe today and tube today.” 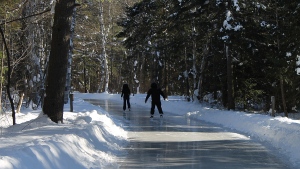