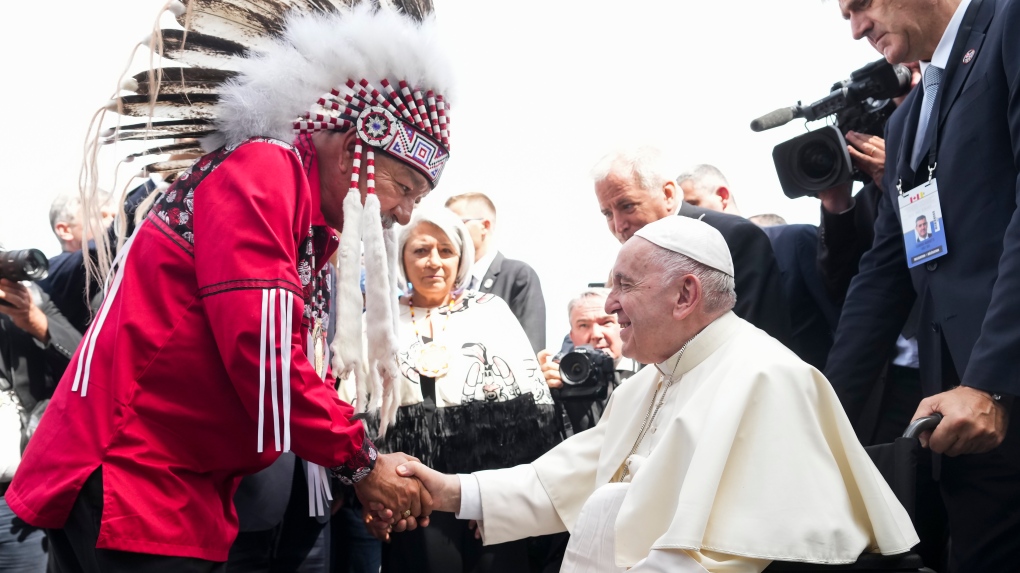 Pope Francis is greeted by George Arcand, Grand Chief of the Confederacy of Treaty Six First Nations, as he arrives in Edmonton on Sunday, July 24, 2022. His visit to Canada is aimed at reconciliation with Indigenous people for the Catholic Church's role in residential schools.THE CANADIAN PRESS/Nathan Denette

As Pope Francis arrives in Edmonton for his highly anticipated trip aimed at reconciliation, the impact of his arrival is being felt in Simcoe County.

The six-day visit marks the first papal visit to the country in 20 years.

The Pope told reporters on the plane before landing that he must handle it with care.

"It is important to survivors to hear but it will never bring back our children, and it won't change the genocide that happened," said humanitarian Joyce Jonathan Crone. "Unless there is going to be immediate action to this truth and forgiveness piece, then it really is going to be just hollow words."

The trip, referred to as the "pilgrimage of penance," is expected to see the Pope apologize for the role of the Catholic Church in the residential school system, where an estimated 150,000 Indigenous children faced neglect, physical abuse and sexual abuse.

As a member of the Mohawk First Nation, Jonathan Crone said her grandfather and brother-in-law are both residential school survivors.

"My generation, my parent's generation all face the loss of identity and culture. I can't speak my language and I don't know my culture and we are all trying to get it back, said Jonathan Crone.

Pope Francis' visit comes after First Nations, Metis and Inuit delegations met with the pontiff in Rome back in March.

Pressure on the Pope to come to Canadian soil and issue an apology grew after the discovery of 215 unmarked graves at a former residential school in Kamloops B.C. last year.

"For us, this relationship is key not only in our history but our current ongoing and loving service," said the director of Martyrs' Shrine, Fr. Michael Knox, S.J.

As the director of Martyrs' Shrine, a Roman Catholic Church in Midland, Father Knox is optimistic the visit will help forge the path towards reconciliation.

"It's my hope that with the events of the next few days new spaces of conversation and opportunity will develop on that walk that we all share," said Knox.

One that Jonathan Crone said needs to be paved with action in collaboration with First Nations, Metis and Inuit.

Pope Francis will make stops in Edmonton, Quebec City and Iqaluit during his visit, with thousands from across the country expected to attend.

Agent: Rushdie off ventilator and talking, day after attack

'The Satanic Verses' author Salman Rushdie was taken off a ventilator and able to talk Saturday, a day after he was stabbed as he prepared to give a lecture in upstate New York.

Parent of child with rare form of epilepsy distressed over N.S. ER closures

Kristen Hayes lives close to the hospital in Yarmouth, N.S., but she says that twice in the past month, her son, who has a rare form of epilepsy, has been taken by ambulance to the emergency room there, only to be left waiting.

Average rent up more than 10% in July from previous year, report says

Average rent in Canada for all properties rose more than 10 per cent year-over-year in July, according to a recent nationwide analysis of listings on Rentals.ca.

Volunteers armed with smartphones are using a 3D-modelling app to preserve Ukraine's cultural heritage one snap at a time.