It's no wonder. In the last month, the President of Molded Precision Components (MPC) has shifted the focus of his entire company, from making auto parts, to producing face shields for frontline workers.

Standing outside of his company's production facility in Oro-Medonte, Yeaman gestures enthusiastically, face shield in hand.

"What would normally be a two-year process, we've pulled off in four weeks."

When COVID-19 reared its head in Canada, MPC was hit hard. The company is a molding manufacturer that specializes in making plastic parts like gears, and many of its clients are from the automotive sector.

"Four weeks ago, all of our orders from the automotive sector stopped," says Yeaman.

Wanting to help in the fight against the pandemic, and to keep his staff employed, Yeaman worked with his team of engineers to design a medical face shield and a machine that could produce them.

The shields went into production this week. 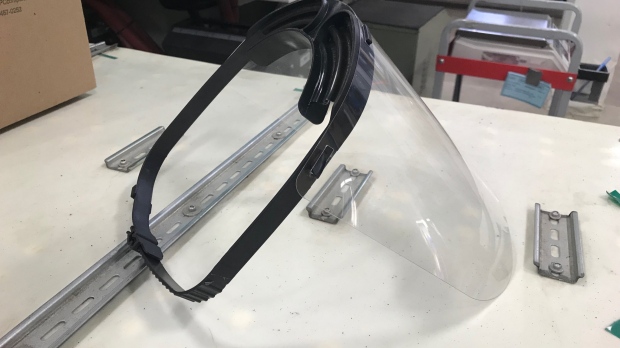 Holding out the pellets, he explains that they are melted down and put into a mold. The mold then produces the adjustable band that goes around the frontline workers' heads. The bands are shipped to a medical device manufacturing company, Sterling Industries, in Vaughan, where they are assembled with the transparent sheets that cover the workers' faces.

Right now, MPC is producing parts for 4,000 shields a day, but once all of its machines are retooled, the company plans to produce 300,000 a day.

The company is expanding so much it has teamed up with the township of Oro-Medonte to use the local community centre arena as a warehouse. MPC took over the arena on Thursday, and on Friday, continued to move items inside.

"With the shut-down, this arena would have stayed unused," says Oro-Medonte Mayor Harry Hughes. "It's so great to see it being used for such a great cause." 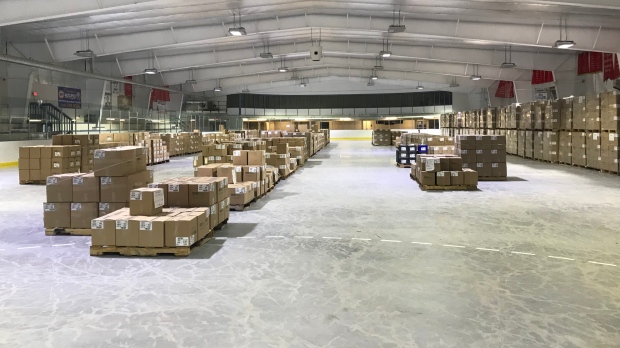 The township also freed up a fire hall for MPC to use for production.

Standing outside of the small fire station in Shanty Bay, Mayor Hughes explains that another, bigger one was recently built. Fire trucks weren't scheduled to move to the new hall until next month, but the township moved them early.

"We had the new fire hall ready just in time," says Hughes.

The facilities are also free of charge. "We would not even consider charging a rental cost for something like this," says Hughes.

The federal government has also jumped on board, giving MPC a five million dollar grant to help pay for the manufacturing.

"It's a great success story," says Barrie-Springwater-Oro-Medonte MP Doug Shipley. "Very proud to know it was right here in our backyard of Oro."

The next few weeks will ramp up even more as MPC works to get other machines up and running.

But as he walks through the manufacturing facility, Yeaman seems only fueled by the momentous task, and says in earnest that he doesn't mind losing a bit more sleep, to make sure frontline workers get the extra protection they need.

"We wish we could make more, faster."

Incredible story out of Oro-Medonte. Auto parts manufacturer MPC is completely retooling to produce these face shields. Right now they are making 4000/day, but in a few weeks - 300,000/day. pic.twitter.com/UQisjhjZfM