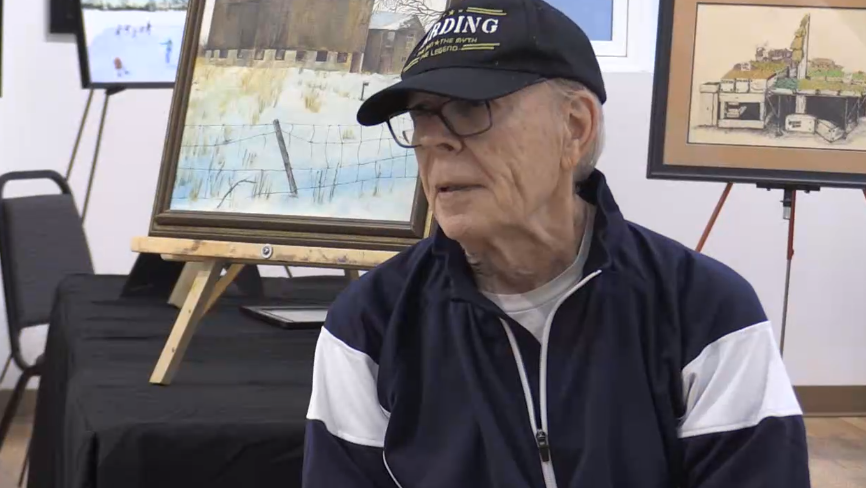 Michael Harding has been painting for the better part of 60 years but was rocked when he was diagnosed with Parkinson's Disease (Steve Mansbridge/CTV News).

An Orillia Ont. man with a debilitating disease is being celebrated for his continued drive to do what he loves the most.

Michael Harding has been painting for the better part of 60 years but was rocked when he was diagnosed with Parkinson's disease.

"it's made stroking the brush more difficult, for sure," Harding told CTV News. "But I still love doing this."

Harding, now 76 years old, said his disease makes it challenging to speak and operate like he once used to.

However, through his own drive and the support of his family, he keeps at it the best way he can.

"He now signs all his work with M.Harding/P.D., because he wants to differentiate between his work from before his diagnosis," said Rose Harding, Michael's wife.

"The day I met him, he drew me a painting and I couldn't believe it," she added. "He just whipped it up with his quick brush strokes. That's what Michael does, he's very good and creative."

Harding has created over 150 paintings and gave some to family and friends this weekend at a private display.

While he's been approached to sell his work in the past, he said he prefers to keep it in the family.

The federal government does not have a willing partner to find a way to introduce fire codes on First Nation reserves, a newly released document shows.

'Why did you even let us rebook?': Regina couple's destination wedding disrupted twice by repeated Sunwing cancellations

Sunwing has cancelled a number of winter flights from Regina, Saskatoon and Winnipeg, causing chaos for one Regina couple’s wedding plans as flights for their destination wedding in Mexico were cancelled not once, but twice.

Prime Minister Justin Trudeau and his ministers are gathering at a Hamilton hotel today to begin a three-day cabinet retreat.

Despite Ontario no longer requiring health-care workers to be vaccinated against COVID-19, all of the province's 140 public hospitals continue to enforce a mandatory vaccination policy, leaving some experienced front-line workers in the dust as facilities face a staffing crisis.

A quarter of Canadians think prices will eventually fall. Here's why that's unlikely

According to a Bank of Canada survey, more than a quarter of Canadians believe that current decades-high prices will drop five years from now.

'Significant' snowstorm heading for southern Ontario. Here's what to expect

Southern Ontario is on track to get hit with a significant winter storm this week, with 'rapidly accumulating snow' expected to make travel difficult.

Mental health therapy is not 'one size fits all': Expert on how to find the right treatment

As Canadians emerge from the pandemic, more are dealing with mental health problems. To treat the conditions, one expert says, therapy is not a 'once size fits all' approach and should be done differently depending on the illness and person.

The mini investigations you never see, and why journalism matters

On CTVNews.ca/W5: Executive Producer Derek Miller highlights an example of a W5 mini investigations that never made it to air, but made a difference in someone's life nonetheless.

COVID-19 vaccine policies at Ontario hospitals are keeping some health-care workers from helping with staff shortages, a significant snowstorm is heading for southern Ontario, and a Regina couple's destination wedding is disrupted twice by cancelled Sunwing flights. Here's what you need to know to start your day.