They’ve been at the scene all afternoon today, a day after material at the scrap yard caught on fire and sent black smoke billowing into the sky. It’s the third fire at the yard in the past three months and investigators want to know why it keeps happening.

While scrap metal and plastic burned yesterday, people who live in the area were forced to go inside and close their windows. That and the frequency of the fires has neighbour Anne Browne worried.

“My concerns are any hazardous materials at that facility contaminating our air and water,” she says.

On April 9, firefighters had to battle flames burning deep inside a pile of scrap. A crane operator had to be called in to dig a path so firefighters could put it out.

Then on May 14, another fire happened. There’s been no cause determined for either fire.

But this third fire has now prompted an official investigation.

“We've had three fires in three months and these need to stop,” says Deputy Fire Chief Rick Monkman. “So we need to find out what the causes are and prevent it from happening again.”

No one was working at the yard when this latest fire broke out and police say it’s not considered suspicious. Air quality tests came back negative.

Nevertheless, fire investigators believe there is reason for concern and will be looking very closely at the recycling yard’s operation.

“It’s going to be looked into further as to where the material came from, was it heated up during the process, how long it was stacked in pile, did it cause spontaneous ignition?” Monkman says.

The fire marshal's office is assisting with the investigation and late this afternoon a ladder truck was brought in so investigators could get an overview of the scene.

Management at the yard wouldn't comment on camera and our calls to head office weren’t returned. This is expected to be a lengthy investigation and both the fire marshal’s office and Barrie fire will be back at the site tomorrow. 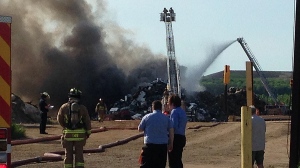