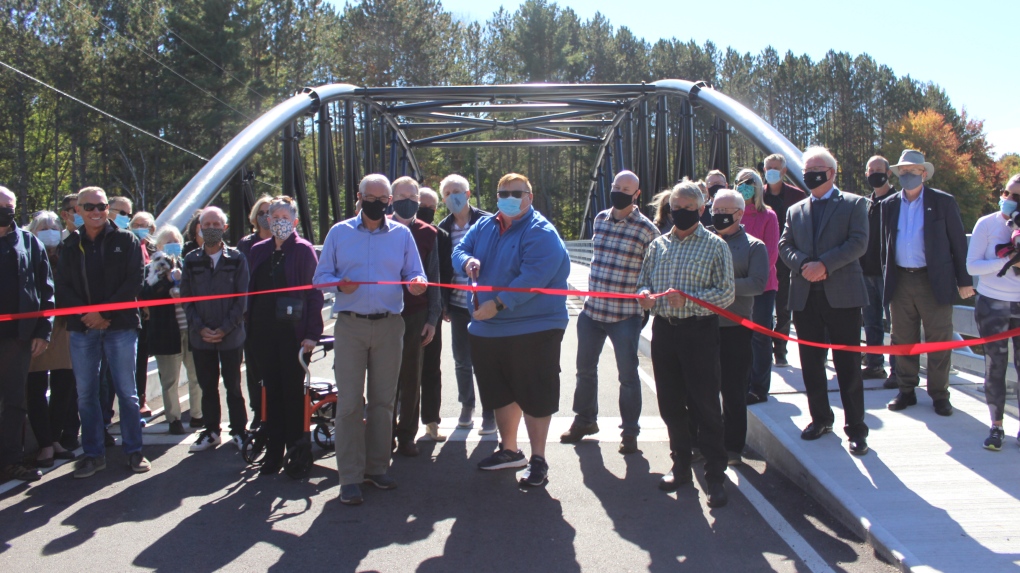 Bracebridge Mayor Graydon Smith (C), MPP Norm Miller and members of council were on hand for the reopening of the Black Bridge in Bracebridge, Ont., on Tues., Sept. 28, 2021 (Supplied)
Barrie, Ont. -

The historic Black Bridge in Bracebridge has officially reopened.

Structural concerns were raised in 2016 with the almost century-old bridge over the Muskoka River on Matthiasville Road, and construction began last June.

The new single-lane bridge was built in a factory off-site and assembled on-site with safety barriers and a one-kilometre pedestrian walkway.

Mayor Graydon Smith, MPP Norm Miller and members of council were on hand for the reopening Tuesday.

"It was a pleasure to celebrate the history of the old bridge and officially open the new bridge that will continue to serve the community for decades to come," the mayor said.

The $2.76 million bridge project was funded through a joint federal and provincial grant under the Investing in Canada Infrastructure Program – Rural and Northern Communities Infrastructure Stream.

No 'warnings or second chances' for illegal activity on Canada Day: Ottawa mayor

Ottawa's mayor is warning the city won't tolerate any illegal activity downtown during Canada Day festivities this year, as the city prepares for possible protests.

Ukraine's richest man filed a lawsuit against Russia at Europe’s top human rights court on Monday, seeking compensation over what he has said are billions of dollars in business losses since Russia's invasion.

The federal government has created a special task force to help tackle the major delays with immigration applications and passport processing that have left Canadians frustrated.