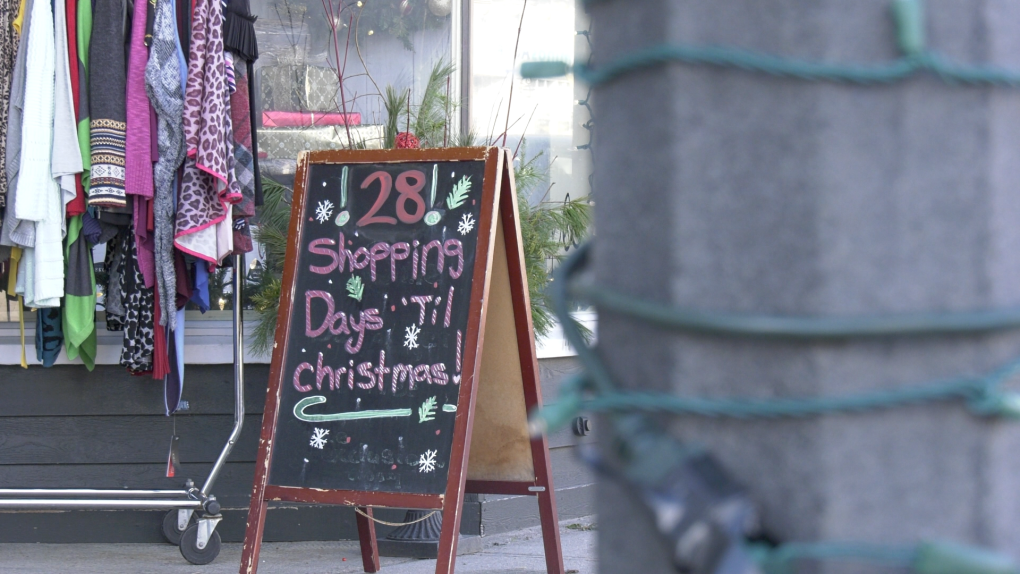 Small businesses in Gravenhurst now have the option to participate in a local currency program in an effort to encourage shopping local (Kraig Krause/CTV News Barrie).
BARRIE, ONT. -

With Christmas now just weeks away, many small businesses in Muskoka are trying to compete with big-box stores and those travelling south for gifts.

This week an initiative began in Gravenhurst to help boost interest in shopping local.

The town announced it is bringing back its own currency rebranded as Gravenhurst Dollars.

"The dollars are available in ten and five dollar dominations, and they are a great way to get people to shop local," said Sandy Lockhart, the executive director of the local chamber of commerce.

The Gravenhurst dollars can be purchased online or over the phone—where they can be delivered or picked up from Town Hall.

According to the Chamber, once purchases are made, businesses would then exchange the Gravenhurst Dollars for Canadian currency.

The financial weight that has come with the pandemic has forced many Ontario businesses to close permanently.

For others, this has been an opportunity to reinvent themselves.

"It's been a weird roller coaster," said Jessica Dursley, the manager and part-owner of Relish Kitchen and Market in Gravenhurst.

Relish was once a dine-in restaurant, but when COVID-19 restrictions came into effect in 2020, Dursley and her Mother Emily reinvented themselves into a health food store with cafe options.

"We've been busier than we ever have been," said Dursley.

The Dursleys aren't the owner local business owners seeing an increase in customers.

The owner of Muskoka Bay Clothing, Judy Terry, says she has also pivoted and developed an online store and began purchasing more leisure clothing to accommodate her clientele.

"Change up product lines and change how we deliver our service and we've, incredibly, expanded our clientele," said Terry.

On Saturday, CTV News spoke with several shoppers in downtown Gravenhurst and most said they have made the decision, during the pandemic, to shop local to support local businesses.

The additional foot traffic brings without its own challenges.

The Dursleys say they have had to reduce their hours to just four days a week and are working around the clock to stay afloat— due to a lack of staff.

"It's like the tables have turned, and with the living wage, it's really really hard to keep up." Said Emily Dursley, the owner of Relish.

The mother and daughter duo are asking their customers to be patient as they try to meet the demand.

Relish and Muskoka Bay Clothing are both accepting Gravenhurst Dollars. A complete list of participating businesses can be found on the town's website.