Environment Canada confirms a tornado touched down on Sunday in the rural community of Teviotdale, a small village south of Minto.

The weather authority confirms to CTV News an EF-2 tornado touched down in the village, with wind speeds between 180 km/h and 200 km/h. Two homes, several OPP cruisers and a small business were damaged by the tornado. No serious injuries are reported.

This is the same type of tornado that hit Angus last year – damaging thousands of homes in its path.

As for a possible tornado touching down in the area north of Highway 89 in Southgate Township, meteorologist Geoff Coulson says Environment Canada believes a tornado didn't touched down. Instead Coulson says strong straight line winds were the likely culprit for damage there.

OPP received several reports of a tornado by residents on Sunday afternoon, as a line of severe thunderstorm pushed across the region. Police say several people inside an outdoor party tent sustained minor injuries, when strong gusts blew the tent down.

A tornado watch or warning was never issued by Environment Canada during these reported sightings.

Residents across most of southwestern Ontario are now cleaning up. Trees and power lines were tossed across lawns and roads.

Kempenfest, one of Barrie’s premier summer festivals, is pleading for volunteers to come help them clean up after Sunday’s storm. Organizers report 65 tents being blown away by strong winds.

The storm also caused a mass power outage for over 50,000 people across the province. Hydro One is still reporting outages for thousands of people in our region alone. According to the Hydro One Storm Centre website, some area might not have power restored until noon on Tuesday.

For the more information on the power outages, you can visit Hydro One's website. 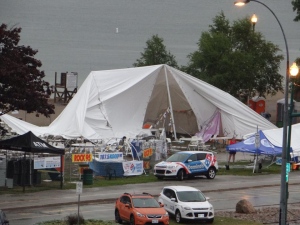