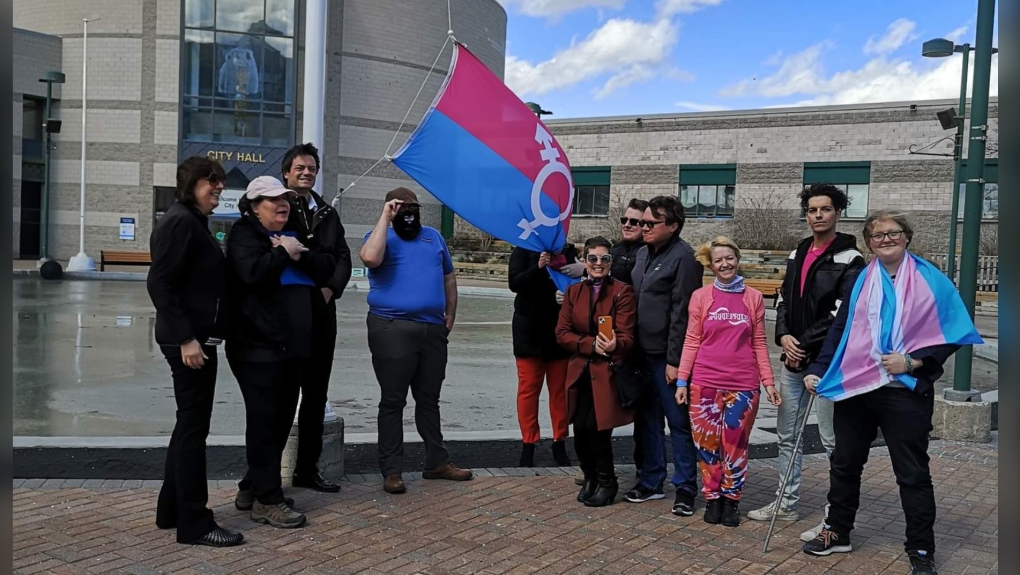 A flag-raising ceremony was held in Barrie on Thursday in honour of Transgender Day of Visibility (TDOV).

The flag-raising took place at City Hall and was organized by TransQ of Barrie.

The goal of TDOV is to amplify the voices of Transgender, Non-Binary, Two-Spirit and Gender Diverse people.

"Visibility for Transgender people can be a double-edged sword," says Kenehan. "Visibility is needed overall, but visibility can often be dangerous for Trans people."

Kenehan adds that Trans people are four times more likely to experience violence than Cis people. Additionally, one in four Transgender women believed the incident to be a hate crime, versus one in ten Cisgender women.

TransQ was created after running a program called 'Gender Journey's' six years ago, a course supporting those who are transitioning. Currently, the group contains 150 Transgender people, which Kenehan believes is the largest group in Ontario.

TransQ is planning on resuming in-person meetings at the Gilbert Centre. For more information about the organization or upcoming events, visit TransQ's Facebook page or Fierté Simcoe Pride's website.

U.K. Prime Minister Boris Johnson has agreed to resign, his office said Thursday, ending an unprecedented political crisis over his future that has paralyzed Britain's government.

Here's who could replace Boris Johnson as U.K. prime minister

Boris Johnson was due to resign as Britain's prime minister on Thursday, bringing an end to a turbulent two and half years in office and triggering a search for a new leader.

The next stage in the battle against COVID-19: bivalent vaccines

Several vaccine manufacturers are racing to develop formulas that take into account the more infectious Omicron variant now driving cases, while policymakers are laying the groundwork for another large-scale vaccine blitz.

Jailed American basketball star Brittney Griner returns to a Russian court on Thursday amid a growing chorus of calls for Washington to do more to secure her release nearly five months after she was arrested on drug charges.