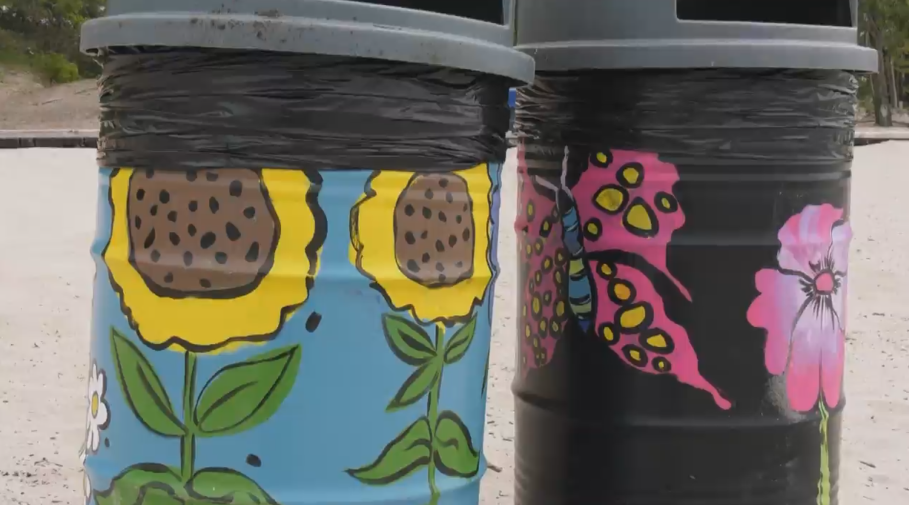 Artists and students in Wasaga Beach have painted 30 waste bins in order to encourage the proper disposal of waste (CTV News).

A new project in Wasaga Beach is hoping to capitalize on the talents of local artists to address the ongoing issue of litter.

Artists have teamed up with local students to paint 30 waste bins at Wasaga Beach Provincial Park. Conversations for the initiative first started about two years ago. The goal is to draw people's attention to the waste bin in an effort to encourage the proper disposal of waste.

"We took a nice approach to it and got the right people involved and everybody who was involved was very supportive and as soon as we reached out and found some artists it was all hands on deck," says Shandelle McCurdie, one of the lead artists in the initiative.

The parks were on board with the idea right away and helped connect McCurdie with officials in the town to help secure funding.

Eventually, four artists were brought on board based on an application process. They teamed up with approximately 300 students from Worsley Elementary and St. Noel Chabanel Catholic School for two days of painting.

"I live down the beach and often find myself picking up a lot of the garbage that is left over, especially after weekends, so I was just really an advocate for cleaning the beach and making sure that we keep the place that we love as pristine as possible," says McCurdie. "But it kind of spiralled into this project that now involved more of the community and engagement and I wanted it to be an initiative for tourists and for locals to utilize the garbage cans but also make it more of a conversation piece."

Another one of the artists participating in the project was Nancy Gareh. As a new resident to the area, she appreciated the sense of community the project created.

"Meeting artists from Wasaga Beach and people that are like-minded as well was terrific, to get to know them, get to know what they are doing in the community," said Gareh. "But also getting a chance to see the community at work, get to work with kids and see their involvement in this project was really inspiring to me."

The artists created a variety of designs for the waste bins with the goal of making them kid-friendly, as hundreds of students were assisting with the painting process.

"Everyone wants to see their hometown well-kept and treated with respect by their visitors," said Alex Kosteck-Silva, another participating artist. "Nobody wants to be strolling the beach and step on a can or anything. So I think this is a great way to encourage people to put their excess away so we can all enjoy a clean beach!"

The group hopes to make this an annual event by working with local officials to continue beautifying objects throughout the community.

Canadian flags hang alongside French and British on the streets of Dieppe, France, each August as the city marks the anniversary of an important and disastrous day during the Second World War.