It was standing room only at Barrie City Hall on Monday evening as several people raised their concerns over the proposal of another air-filled sports dome in the city's north end.

The public presentation about the inflatable structure revealed it would be located behind ÉSC Nouvelle-Alliance High School on Anne Street.  At more than 58,000-square-feet and 20 metres high, it would tower over the school building.

Council heard that the dome could be used for the school's purposes during the week from 8 a.m. to 5 p.m., and Ballsports Facilities Developments would use it for commercial use during off-school hours. 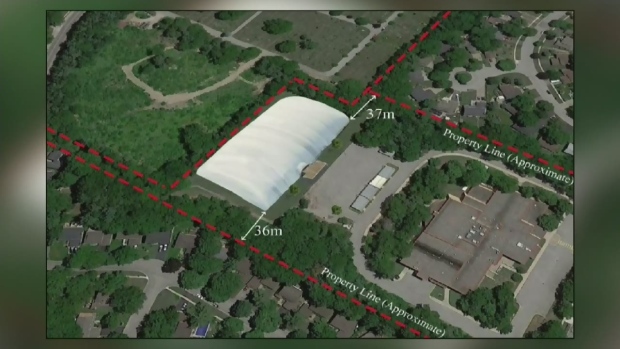 Deputy Mayor Barry Ward represents the area where the proposed dome would be located, and says he's worried that granting the special provisions for a zoning bylaw amendment would set a precedent.

"When people get schools in their neighbourhood, they expect them to be schools. They don't expect commercial use, 20 hours a day, cars driving in and out. They sort of accept the fact that between 8:30 and 4 o'clock every day there's going to be uses on that property but quiet on the weekends, this is something quite different," Ward explans.

Residents took to the mic one after another to voice their concerns about an increase in noise, traffic, parking and safety.  "How does it make sense to put a 65-foot white blob in the middle of a 40-year-old neighbourhood," former Georgian College president Brian Tamblyn said.

Doug Young owns the Barrie Sports Dome on Hanmer Street and says the new structure should be put elsewhere, and not less than four kilometres from his current facility. "If they are going to put another dome in Barrie, and it's questionable whether Barrie could even support another dome - but I think it could, in the south end. It's crazy to put another one in the north end when all the population's in the south end."

If the city gives the green light to the project, it will operate year-round. City staff will put together a report and present it to council with their recommendations.

That report should be ready sometime in January 2020.