Buying groceries has become more unaffordable than ever, forcing shoppers to change how and what they buy at the grocery store.

A new Nanos Research poll conducted between October 30 and November 4 found 61 per cent of those surveyed are buying less expensive food, and one in four shoppers stockpiles food.

Seventeen per cent said they eat less food because of the cost. 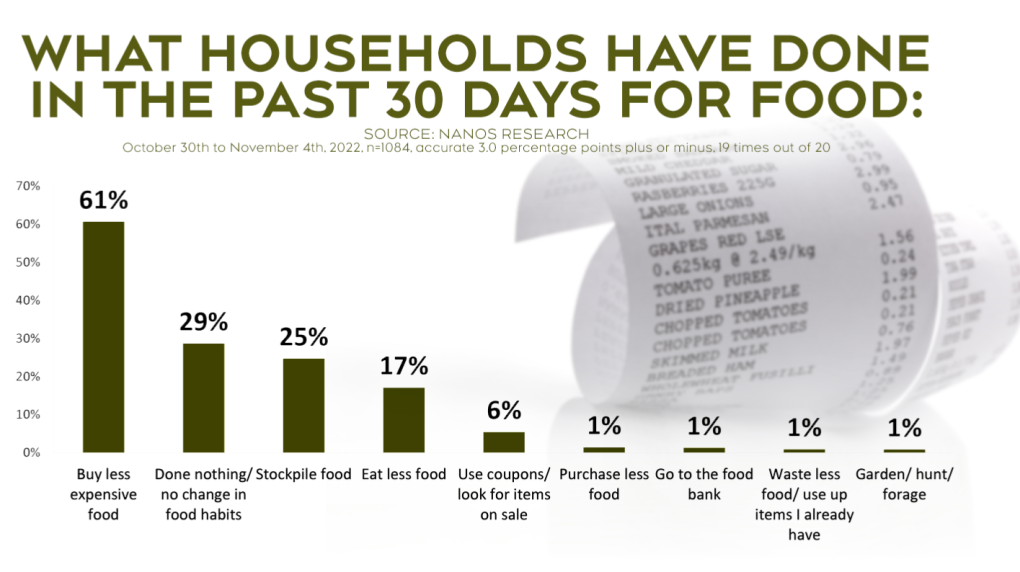 A new Nanos Research poll conducted between Oct. 30 and Nov.4, 2022, found 61 per cent of those surveyed are buying less expensive food, and one in four shoppers stockpiles food.

The executive director at the Sharing Place Food Centre in Orillia says it is serving about 1,700 clients per month.

"We're seeing about a 30 per cent increase year over year, and a lot of it's just tied to, from what we hear from our members, the cost of groceries and the cost of gas and the cost of housing," said executive director of the food centre, Chris Peacock. "It's just all going up, and people's income is not. It's causing a lot of challenges at the home front."

"Without them, we wouldn't know what to do," said Sonia Gaspar; who is one of the thousands of parents in Orillia struggling to put food on the table.

"The best thing about the food banks, they kind of help out and lower our prices in food and stuff like that," she said.

"People are having to decide right now whether they feed themselves or their kids or if they're able, they may have to skip meals at the end of the day," said Peacock.

Meanwhile, in Barrie, the food bank is experiencing a jump of about 10 to 20 per cent in its food costs. Chicken, for example, has increased by 20 per cent from last year, and dairy and eggs have jumped about 15 per cent.

Also of concern, according to food bank staff, are supply chain issues, specifically affecting its ability to purchase staple items, like peanut butter, at sale prices.

Shoppers, like David Kay, in Barrie said he sees the need for budgeting and browsing flyers for sales as a way to get by effectively.

"If they're not on sale, we leave them aside for now until we find them on sale another time," he said.

"Prices have jumped a lot even during the past week. Something like lettuce, for example, is suddenly $4.99 when it was at least half that price a week ago," noticed Kay.

Some stores and restaurants aren't even carrying certain types of lettuce like romaine, citing intermittent shortages and unusually high costs.

"Right now, it costs us between eight and nine dollars to bring in the lettuce, and we're selling it for five dollars," said Shane Van Casteren, owner of Nicholyn Farms in Springwater.

Nicholyn, which is located along Horseshoe Valley Road and has been in business for 40 years, says it is offering romaine lettuce at a loss; to help customers feed their families.

Van Casteren said his costs have jumped too.

Still, he said Nicholyn Farms is doing its best to keep prices down.

"It's appreciated," said long-time customers like Viola Blanchette, who is grateful while mindful of how much she has to spend shopping for groceries.

"When the prices are high, we're patient, and when they come to what we feel is worth it, then we purchase it," said Blanchette.

"To see people that are eating less or skipping meals, that's a big problem," said food price expert Dr. Simon Somogyi; who is Arrel Chair in the Business of Food at the University of Guelph

The Food price expert said inflation and the rising costs of everything from gas to housing had forced many to shop elsewhere, buying cheaper no-name products to stay on budget.

"They're using their dollar wiser, and this really is the first time in many generations where people have had to look at creating budgets, being a smart shopper," he said.

Peacock said the problem of feeding the city's most vulnerable wouldn't go away without systemic changes to ensure the under-housed and marginalized populations are cared for by the government and communities.

"We need policies in place, and changes on the amount people are receiving, so if that's your social assistance, ODSP, OW, that's individuals working on the front lines that are making minimum wage; they need to make a living wage," he said.

"They need to be able to afford life's necessities such as food, which should be a basic human right."

Peacock said he expects demand at The Sharing Place to rise through the holidays.

Police have released a video of a driver who smashed a vehicle through the doors of Vaughan, Ont. mall early Wednesday before allegedly breaking into an electronics store.

The federal government is expected to introduce a law as early as Thursday to delay the extension of medically assisted dying eligibility to people whose sole underlying condition is a mental disorder.